A Word Game That May Make You Flip

Note: This review is based on the 2nd edition of Kerflip! using a modified version of the 1st edition provided by the designer.

Kerflip! is a fast-paced word game that rewards your word creation skills and speed. 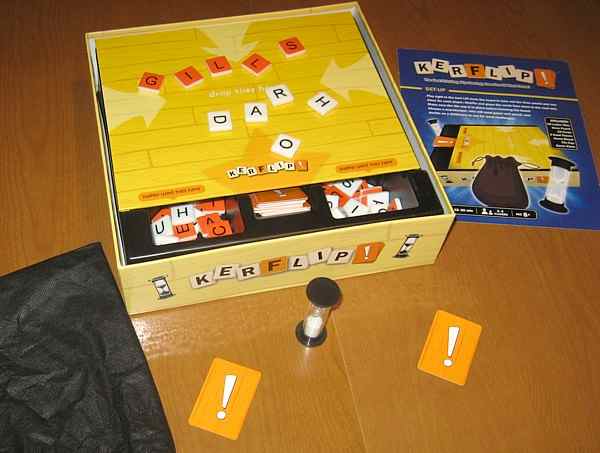 Kerflip! consists of a unique board-and-box which combine to form the play area. 90 tiles – 89 letter tiles and 1 lightning round tile – go into a bag. When drawn, they are dropped onto the board which fits into the box as shown above.

Letters that are used to spell words in a given round are swept off the board into the box underneath where they are easily shaken back into a small box (see below) and are ready for another game. 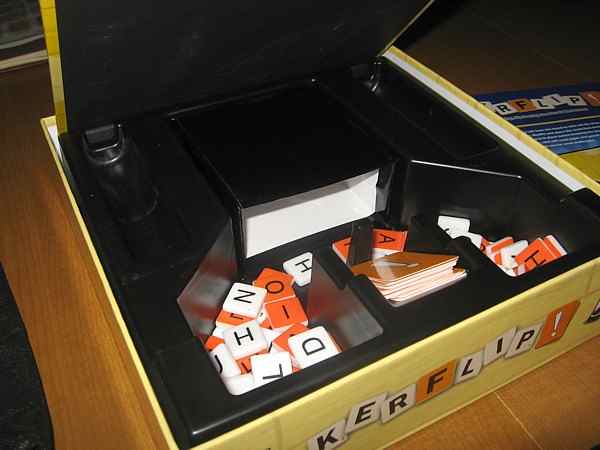 The box also holds bonus cards that are taken when numbered letter tiles are used. They boost your score when revealed at the end of the game.

When the last player is ready, everyone drops their tiles onto the board and flips them all to the ivory side. The tiles may not be touched until scoring time at the end of the round. Players then race to call out the longest word they can find, hopefully including any numbered tiles in order to win bonus cards.

If you’re not the first player to say a word, you’ll want to try to make your word from letters not in that first word, if at all possible. That’s because any letters that are reused will only count half as much in scoring.

To facilitate proper scoring, the first player will flip (or Kerflip!) his tiles to the orange side, indicating that they are only worth 5 points for other players instead of the 10 points he was awarded for each. Note that the orange side does not show the number bonuses either. 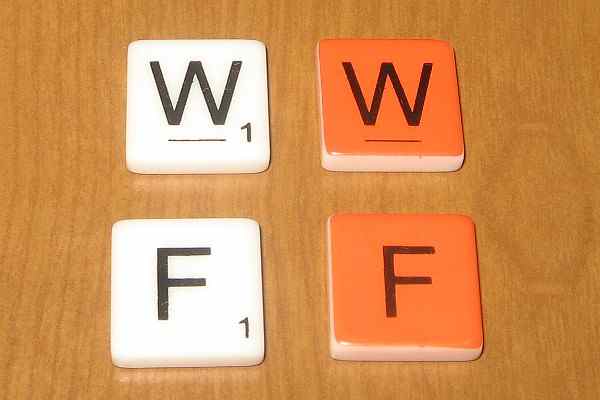 If the lightning tile is drawn, whoever calls the first word receives the bonus it shows which is either 25 or 50 points.

When only one player is left to call a word, the other player(s) may choose to flip (or Kerflip!) the 15-second sand time to speed him along. If a player can’t form a word or fails to pass a challenge by another player, he scores no points for the round.

Unused tiles are returned to the bag for possible use in a future round. Play continues until there aren’t enough tiles left in the bag for each player to grab the required amount.

Assuming you kept a running total during the game, add any bonus cards gained to each player’s score, and the highest total wins.

Kerflip! is light fun for anyone who can spell short (the minimum is 3 letters) to medium length words. You’ll easily be able to play in less than half an hour, especially with the help of the timer, so consider this a filler game if used on a longer game night. If you really enjoy your word games, you could easily play more than one game back to back.

Kerflip! is a good game for families. Parents could restrain themselves a bit with younger children, allowing them to be first from time to time. I’m not advocating letting them win, but you can make it more fun for them to win some of the rounds. Eventually, they’ll get good enough to Kerflip! you all on their own!