Java vs Other Kramer/Kiesling Games

It’s no secret that I like board games designed by Wolfgang Kramer and Michael Kiesling. The duo has created my favorite board game of all time, El Grande, and there are others such as Tikal, Torres, and Cavum, that I rank highly.

Now Java is another game to add to that list. 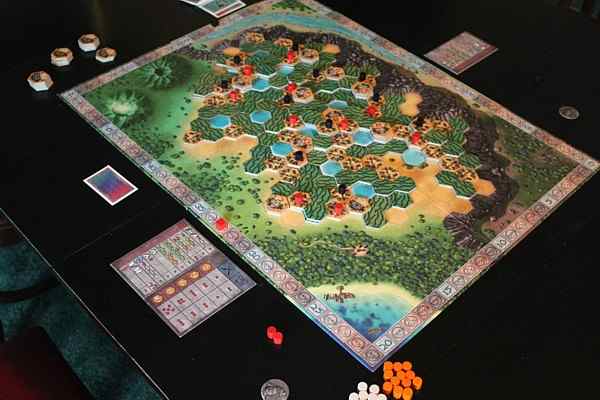 Java is not a new game; it first came out in 2000. It’s commonly known as 1/3 of the Mask Trilogy, which includes Tikal and Mexica.

It may not be completely fair to judge Java after just one or two plays, but I think I like Java better than Tikal, which is generally ranked highest of the three in the trilogy.

To play Java, you spend up to 6 action points adding pieces to the board – land tiles, water tiles, and dudes (wooden pawns) – or moving dudes around on the board, which roughly depicts the Indonesian island of the same name.

Your goal is to organize (basically tan-colored) camp hexes in groups of 2 or more up to a maximum area of 10. When a suitable camp has been formed, you can hold a festival there; i.e., score it for half as many points as its size.

You can score the same camp again later, if you increase its size by 2 or more (again, up to 10). 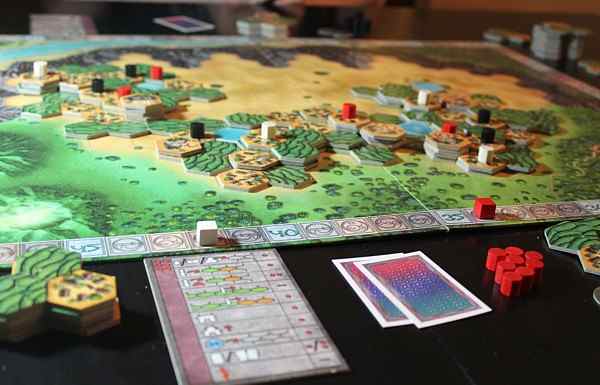 One of the most interesting facets of the game is that camps score their full value at the end of the game for the player who has control of it. Control is determined by the altitude (tiles can be stacked) and amount of dudes in the camp. The player (if any) with the second-highest amount of control points in the camp scores half its value at game end.

However, that can change during the final round of play.

When the last tile has been played, the last round is triggered. Each player takes a final turn and scores the camps in which he has dudes. Your final play can give you control in a camp that has already been scored by an earlier player. Thus you can get the full point value just like that previous player did.

Java, Blow Me Away

I got fairly blown away by this end game scoring in my first (2-player) game because I saw what was going to happen too late. That made me eager to give Java another go to see how much better I could do the next time.

My next game was a 3-player session. While I didn’t win this time either, I at least did better in the end game than the first time.

Java plays very well with both 2 and 3 players. I suspect that the board gets a little crowded with 4 players and that it finishes sooner than you’d expect. I also suspect that it’s still a very good and fun board game with the full complement of gamers.

Check the price of Java on Amazon.

Java Is My Cup o’ Tea