Why You Need Nordic Countries

If you are not familiar with Ticket to Ride (TTR), you should either get a copy of that fun board game first or jump right into Ticket to Ride: Nordic Countries. It’s no more difficult to learn that the original game. 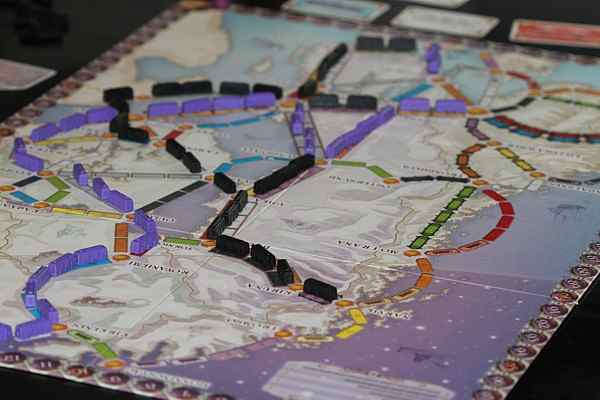 Nordic Countries is for 2 or 3 players only, unlike TTR which can be played with 2 through 5. The Nordic board is just as big as the TTR board, but game play feels much more cutthroat, even with only 2 players.

Nordic offers two types of tracks not found in TTR – tunnels and ferries. The theory with tunnels is that you never know how much you really have to dig to get through to the other end. So when you play the number of cards that would normally complete the section of track, you also draw the top 3 cards from the deck. For each of those cards that matches the color of your track, you have to play another card of that color from your hand. If you don’t have enough, you have to take back your original play and try again another turn.

Ferries require wild cards for completion. If you lack a wild card, you can play any 3 cards in its place. It’s also worth noting that there are no wild cards in this version. You can pick one up (even face up from the draw area) and another card as well. You can even grab 2 of these engine cards in one turn. The downside is that you cannot use them on normal routes – routes that are not tunnels or ferries.

Nordic also has one long route from Murmansk in northern Russia to Lieksa in Finland that is a grand 9 trains long. You can get 27 points for competing this route, even without an associated ticket card. In addition, you can play any 4 cards for one of the trains along the way; that is, you don’t have to have 9 cards of the same color to finish it.

Winning and the Bonus

As usual, the player with the most points is the winner.

The bonus in TTR goes to the player with the longest consecutive train route. In Nordic, the bonus is awarded to the player who has completed the most routes. That 10-point difference can often win or lose the game for you.

We still play the original Ticket to Ride from time to time, but we’ve come to enjoy Ticket to Ride: Nordic Countries even more. My wife like it especially for the purple trains. She’ll even transport them to the original game sometimes!

Check the price of Ticket to Ride: Nordic Countries on Amazon.

One thought on “Cutthroat Trains – Ticket to Ride: Nordic Countries”