Reviewing Hats Off – A Game from My Childhood

Everyone’s got one. It’s that game (or toy) from your childhood that you still remember playing as if it were yesterday. Maybe you’ve even got more than one.

One of mine is Hats Off

, the dexterity game with the slide-o-matic score keeper from Kohner Bros. I can recall playing this game by myself and with others on the living room floor. 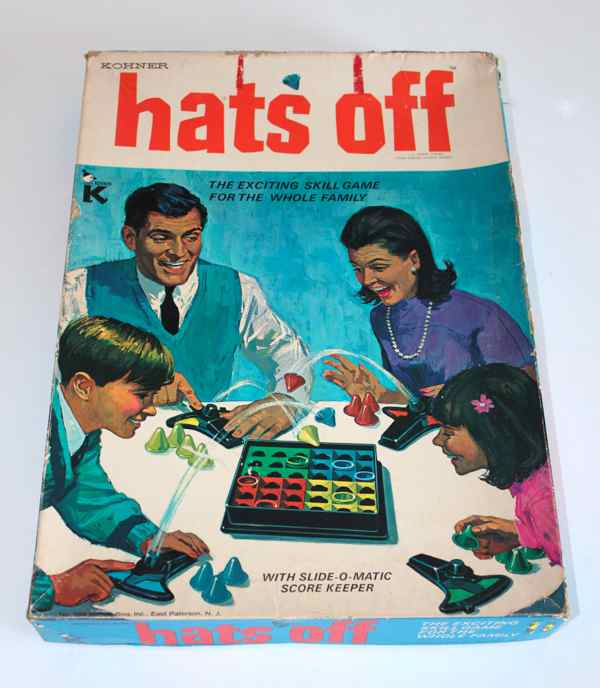 This isn’t a game this is produced anymore today, but you can still find vintage 1967 copies online at places like Amazon and eBay.

How Do You Play Hats Off?

The game comes with a central board of sorts with four colored target areas. Each player takes a hat launcher and six hats of the same color. The hats are cones weighted at the point by a ball bearing that allows them to fly better.

You place the board so that your target area is on the far side relative to where you are sitting. Thus, if you are red, the nine green holes in the target area will be closest to you. If you are blue, the yellow area is nearest you. 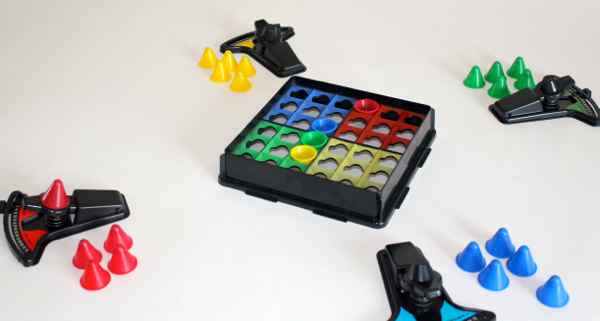 Make sure the slide-o-matic score keeper on the front edge of your launcher is initially set to zero, and have your six hats at the ready.

When everyone is ready, one player calls, “Ready, set, go!” On that signal, you pick up a hat, place it on your spring loaded launcher, push down and release the launcher to send your hat flying toward the target area.

The first player to shoot all six hats shouts, “Hats off!” Play for that round stops and points are counted.

How Do You Score Points?

Hats that don’t land point down, that land in another player’s target area, or that land outside the board don’t score any points.

Also, the player or players who called, “Hats off!” each score 5 additional points.

How Do You Win the Game?

Hats Off is played over several rounds. Keep a cumulative score on your slide-o-matic score keeper. The first person to score at least 75 points wins.

If more than one person goes over 75 in the same round, the player with the highest total wins. If there is still a tie, play more rounds until the tie is broken.

Is the Nostalgia Worth the Purchase?

Hats Off is a game I own because I put it on my Christmas wish list, and my son bought it for me. I probably wouldn’t have bought it myself, but I’m very glad to have it for myself as well as for my family including the grandchildren. Adults who like Crokinole should also like Hats Off since it feels like it requires similar skills.

Each round plays very quickly by design. The sense of urgency combined with the need for accuracy provides a nice balance. You theoretically get better at launching the more you play, so more experienced players should always win over less experienced, if they want to.

For a game that is approaching 50 years of age, the components have held up very well. The springs in the launchers still have plenty of spring left in them. The plastic hats still hold their ball bearings tightly. The target area shows no real signs of wear. Just about the only part that shows its age is the outer box itself which has that faint odor that old cardboard tends to get over time.

If you’re looking for a quick dexterity game to play with adults as well as with children, Hats Off should suit you just fine.

Get Hats Off at Amazon.

Hats Off to Hats Off