Playing with Dice in the Bronze Age 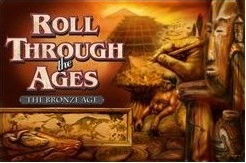 Some time ago, I played Roll Through the Ages: The Bronze Age. It was an enjoyable, easy to learn game.

I have played Puerto Rico, San Juan, and Through the Ages: A Story of Civilization. This game felt like a shorter version of each of those mixed together in a fun and interesting way.

As you might expect from the title, you have to roll some dice in this game. The dice provided are large and wooden. As I mentioned to the other players while playing the game (on a wooden kitchen table), it very nice that these dice are wooden rather than plastic or some other harder material, because they don’t make such a racket when rolling them, which is something each player gets to do at least three times per turn.

This isn’t a roll and move game like backgammon. These are specialized dice that have icons on the sides instead of pips. If you normally shy away from dice games, either because you don’t like roll and move or because you don’t like the randomness they bring to the table, you should still like this game anyway. There is some randomness inherent in rolling the dice, but it is quite manageable. You don’t feel like you’re totally at the mercy of the roll.

The dice give you goods and workers which you use to finish developments and monuments. The latter give you points toward victory. When an end game condition is met, the player with the most points wins.

I really enjoyed my first play of Roll Through the Ages. It’s not too expensive considering it comes with very nice wooden bits. You can play solo or with up to four players.

Roll Through the Ages toward Victory