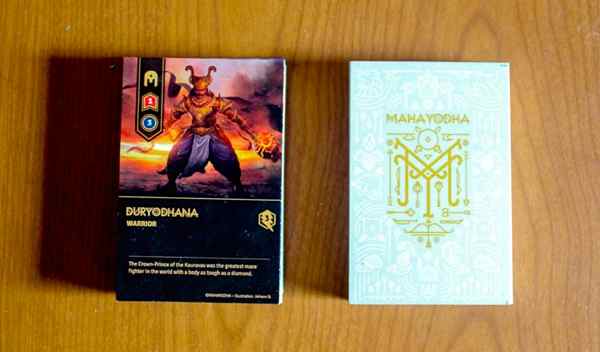 Maha Yodha is a card battling game based on a seldom-seen theme – Indian (that is, Hindu) mythology. You play one of two factions (mostly easily identified by black and white card backs) against a single opponent. Each of you has a similar, but not identical, deck of cards consisting of warriors, weapons, actions, and artifacts (mostly scrolls in the basic decks).

Each player starts the game with 20 life points. Your goal is to reduce your opponent’s life points to zero for a win. You will do so by clever card play and hand management. Certain combinations of cards, such as a warrior and his best weapon, may speed you to your goal. Your opponent will obviously have actions he can take to counter your moves, so it’s not as easy as all that. 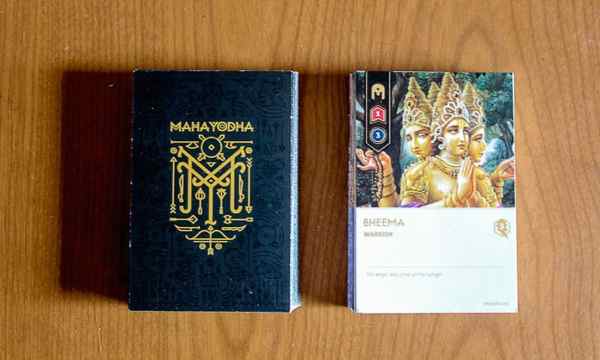 Maha Yodha is intended for an audience of beginners in this style of card game. As such, it has simple rules and plays quickly.

On your turn, you’ll put cards into play. If the net total of your attack points and your opponent’s defense points is in your favor, you will deal him some damage sending him closer to the target of zero points. But if the net total is in his favor, you are the one who will get hurt instead. 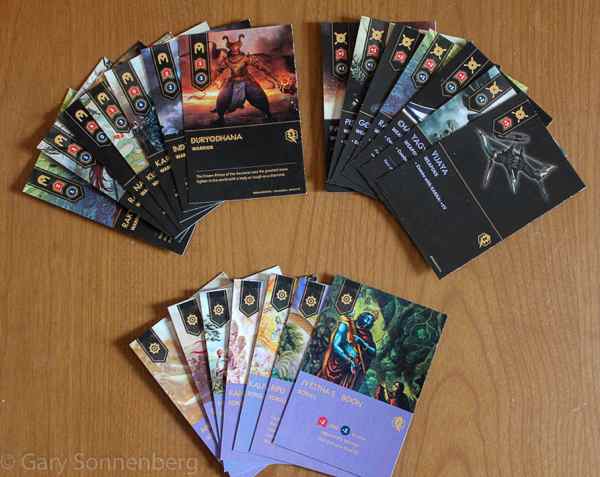 The artwork on the cards is quite elegant. If you want to get into Hindu mythology a little more, there is text on many of the cards that will be of interest. It’s just flavor text that has nothing to do with game play, but it can be worth reading just the same.

As mentioned, one deck is basically black – the Asuras – and the other is white – the Adityas. In Western culture, this would seem to indicate that the Adityas (where white usually means the good guys) should win most of the time. Not so with Maha Yodha. The colors simply help distinguish which cards belong to each player.

I received a preview copy (prototype) of Maha Yodha which is shown above. The final version is available on Kickstarter, as of this writing.

The pledge goal was reached quickly. Several stretch goals and add-ons are available.

Check it out on Kickstarter. If you already like battlefield card games or want to dip your toes in the water, so to speak, Maha Yodha is a good game to try.

Can You Become the Greatest Warrior – the Maha Yodha?