Get Your Moves In Before the 4th Corner Appears

4th Corner is a tile laying game after the order of Carcassonne. You build the game board as you go by randomly drawing tiles and adding them to the tiles already in play. This differs from tile laying in Aquadukt where tiles can be played anywhere on the board. 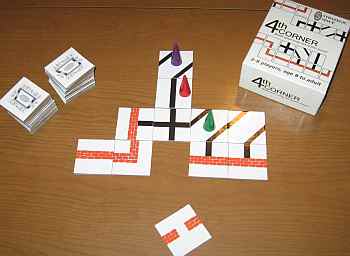 Tiles played form a maze. You have a pawn that you try to maneuver through this maze towards an exit tile. Initially and for a good portion of the game, you don’t know where that exit tile will be however.

4th Corner derives its name from the rule that states that, when the 4th exterior corner tile is placed, you can then replace tiles already played. The lone exit tile is returned the draw pile and you try to position your pawn for a quick exit from the maze.

Placing or replacing tiles near the end of the game is a balance between benefiting your own pawn and hindering your opponents’ pawns. Which you choose to do probably depends on which of you is closer to the exit tile.

The first player to reach the exit scores zero points. Other players score based on how far away from the exit tile each pawn is. Since scores are often lopsided after one game, it is suggested that you decide beforehand how many games you’ll play and then accumulate scores game over game.

Be Ready for the 4th Corner

3 thoughts on “Be Ready for the 4th Corner”