Empires have been built on many foundations. In the game, Empire Builder, you can try your hand at building one on the railways of North America. 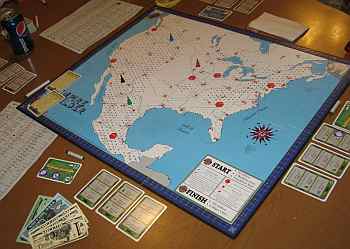 Taking a turn in Empire Builder allows you to first expand you rail lines as far as $20 million will take you. It realistically costs more to lay tracks through mountains and into cities.

The second facet of a turn involves moving you train along a route – preferably your own – and picking up goods or services offered by a city you might reach or delivered the same to a city if one of your load cards tells you that they want some of the same at that location.

You collect money for making deliveries to various cities. Your goal is to collect $250 million in cash and to connect your crayon rails to at least 5 of the 7 major cities spread across the continent.

Crayon rails? Yes, you take a crayon in your color and draw lines from point to point right on the board to signify your rail lines. While this concept is not new (Empire Builder was first published in 1980.), it may be new to you. I played my first game just this month.

The surface of the game board is a slick material that allows you to draw on it with crayon and yet allows the crayon to be wiped off with a cloth or paper towel, much like a whiteboard.

The rules of Empire Builder are easy to learn and you’ll probably enjoy drawing on the board. You may find that it lasts a little longer than you expected since it can take time to accumulate your $250 million, depending on which load cards you get and which disaster cards show up.

Check the price of Empire Builder on Amazon.

Build an Empire in Trains