Ticket to Ride – A Modern Classic

The first time or two that you hear the title of the train game, Ticket to Ride, you simply must burst into a line (or perhaps the full chorus) of She’s Got a Ticket to Ride. Once you get over that, you can get down to playing a really fun Euro game. 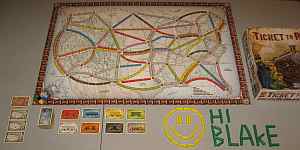 Ticket to Ride combines cards, train cars, and a mostly-accurate map of the United States and Canada. (Duluth sags to the south where the Twin Cities should be.)

Ticket to Ride is a set collection game; that is, it’s a type of rummy in which you collect cards of the same type so that, when you have enough of them (sometimes one is enough), you can place some of your train cars on a route between 2 cities on the board.

How do you decide which route to complete? At the beginning of the game, you select up to 3 ticket cards that serve as your initial goals. Tickets show 2 cities that you need to connect with your trains and the number of victory points you will be awarded, if you attain the goal by the end of the game. Failure to reach a goal results in negative points.

Every time you lay down a set of cards and corresponding trains, you score victory points that are tallied on the scoring track around the edge of the board. Combine that with ticket points and a possible end game bonus (if you have the longest train on the board) to get your final score. The game ends after one player has placed all but 2 (or fewer) of his train cars.

For as simple as Ticket to Ride is to learn, it’s almost surprisingly fun to play – especially if you’ve never played this style of game before. Younger children, teens, college students, adults – all can enjoy Ticket to Ride equally.

Many people I’ve played this game with (and one nephew in particular) really like playing with the little plastic train cars – and not just by placing them on the routes either! They don’t stack very well like some game bits do, but you can make designs of all sorts with the cars on the table next to the board. It’s a little like playing with a monochrome Lite Brite.

Ticket to Ride can handle from 2 to 5 players. Our least favorite is a 3-player game, but it does play well with that many too.

Check the price of Ticket to Ride on Amazon.

She’s Got a Ticket to Ride

4 thoughts on “She’s Got a Ticket to Ride”