Canal Mania is the somewhat funky title of a card drafting and route building game based on England’s canal building era of the 18th and 19th centuries. In Canal Mania, you enlist the aid of the greatest engineers of the day to construct canals to fulfill contracts and deliver the goods. 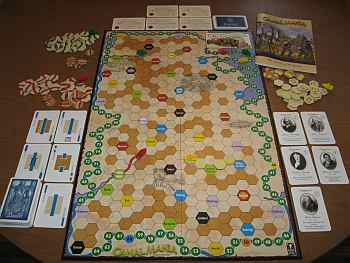 Pick up a contract or two and build a canal made of various types of hexagonal tiles between the specified cities. Navigate through the easy and rough terrain found in the English countryside laying down stretches of canal, aqueducts, and tunnels.

Employ James Brindley, John Smeaton, Williams Jessop, Thomas Telford, or John Rennie to give you that edge just when you need it. They’ll use their specialties to help you complete your contract more efficiently than you could by yourself.

Play you canal segment cards to lay corresponding tiles. When a route is complete, you can deliver goods from one city to another. Points are awarded arriving at the cities along the route – sometimes some of the points will go to your opponents.

Continue building and delivering until the contracts are nearly gone or until someone reaches a predetermined number of points based on how many players are in the game.

Canal Mania feels like a slightly more complex version of another card drafting and route building game called Ticket to Ride. You may have heard of that one since it is more widely known.

Check the price of Canal Mania on Amazon.