The Pillars of the Earth is a worker placement and resource management board game loosely based on the book by the same title. What exactly is a “pillar of the earth”? I won’t spoil it; read the book 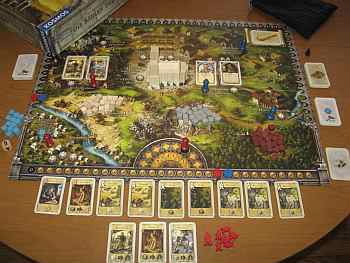 A round, in The Pillars of the Earth, consists of several phases. In the first phase, you take turns selecting cards that will supply you with goods or that will upgrade (or add to) your ability to convert goods into points.

In the second phase, you place your master builders on the game board for additional points and benefits. Benefits include protection against possible disasters, exemption from taxes, additional workers, and trading in the market place.

After resolving all the actions provided by your master builders, you may trade in any good you’ve gathered for victory points based on the conversion rates and capacities of worker cards.

As in any good Euro game, there are many paths to victory, and I think we’ve tried almost all of them. The three common types of resources – sand, wood, and stone – can each be used to build a path to a win.

The Pillars of the Earth has one of the most beautiful game boards I’ve seen. The colors and detail pull you in making you wonder just what this game is all about.

One of my few criticisms of the game, and not an important one at that, relates to the wooden cathedral that is supposed to be used as a round counter. It’s completely useless. We stopped using it long ago. It’s much easier to refer to the worker cards that have large numbers (1 through 6) on their backs.

Another worker placement game like the fun board game The Pillars of the Earth is Kingsburg. In Kingsburg, however, your workers are not so much workers as they are dice!

Check the price of Pillars of the Earth on Amazon.

Are You a Pillar of the Earth?

3 thoughts on “Are You a Pillar of the Earth?”