The Basari Is Not the Place to Follow the Crowd

Basari, which means bazaar, is a simultaneous action selection board game featuring dice, cards, and glass gems. The gems are so much fun to handle you might want to find more uses for them just so you can keep playing with them. (There is a another game called Bazaar which uses similar but slightly larger gems for trading purposes too.) 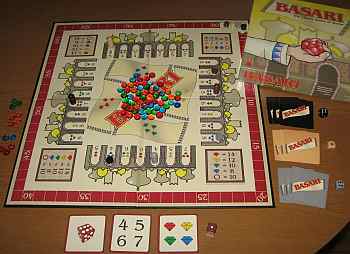 To start the fun board game Basari, you secretly select one of your three cards. When all players have made their selection, cards are revealed simultaneously. If you are the only player to choose your card type – dice, points, or gems – you get to take that action immediately.

If you and one other player chose the same card, you must barter with your gems for the right to play said card. If you win, your gems go to your opponent.

If three or four players choose the same card, no one gets to perform it.

Gems have a relative worth which comes into play both when bartering and when scoring. In descending order of value, the colors are red, yellow, green, and blue.

Your gem action card allows you to take take the gems shown on the archway track where your merchant token currently sits.

Your points actions card gives you the number of points shown where your merchant token sits.

Your die action card allows you to roll your die and move your merchant token around the archway track the number of spaces shown on the die. Then you subtract that number from six and move that many points on the scoring track on the edge of the board.

Basari plays best with four players, due to the simultaneous action selection mechanic. This is the main reason I decided not to keep my copy. We didn’t often have four players available, and when we did, we wanted to play something else. That said, Basari is still a good game that you will probably enjoy.

Check the price of Basari on Amazon.

2 thoughts on “Barter at the Basari”