How much money did you collect the last time you landed on Free Parking in Monopoly?

Did you get a good deal on that Monopoly property that went up for auction when one of your opponents passed on buying it outright? 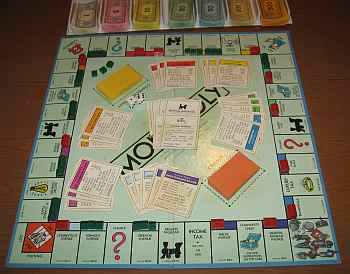 How much interest did you pay when you flipped that mortgaged property back over to the front side?

If you have never played Monopoly according to its standard rules, or if you’ve never played it at all, you owe it to yourself to obtain a copy or find a friend who owns a copy and play it a time or two.

Monopoly is a mostly a set collection board game with elements of auction, dice, and trading games. You try to collect same-colored sets of properties from which you will collect rent when your opponents land on them.

If you are able to collect a complete set of like-colored properties, you can build houses on them and increase their rental value. Eventually, you may be able to upgrade a set of houses to a hotel and really start to rake in the cash.

Your ultimate goal is to run your opponents out of business by making them go bankrupt. If you are the last one with all the cash, you win.

Played correctly, Monopoly can be a fun game that doesn’t last forever and a day, as some people claim. Those people were probably playing according to some house rules that tend to extend the game beyond its usual time frame.

Before you play Monopoly again, reread the official rules. They’re not very long, and you’ll know which other rules to eliminate for a more enjoyable game.

You might also want to examine these strategies for improving your chances of winning the game.

There’s only one die in the fun board game of Monopoly, but if dice are your thing, you may want to read about Backgammon in the next post.

Check the price of Monopoly on Amazon.

Do You Really Know How to Play Monopoly?

One thought on “Do You Really Know How to Play Monopoly?”