Trade Up or Down at the Bazaar

Collect gems and barter with them to achieve your goals at the Bazaar. Well, the gems are only glass beads, but they’re still pretty cool. 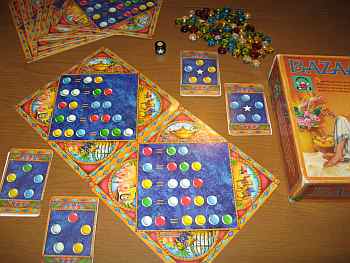 Bazaar is a fun board game all about trading. You start with nothing. Roll the die to collect one gem. Then trade up from there, if possible, or roll again to collect another.

You barter based on the equations shown on two cards chosen randomly from the supply of ten. Gem swapping can go either direction using any equation. Most often you’ll trade to get more gems.

Your intermediate goal is to acquire the same set of 5 gems shown on one of the currently-visible smaller cards. If you’re the first to do so, you collect the card and score points based on how many gems you have left after cashing in the 5 shown on the card.

Depending on which edition of the game you have, you’ll be given various sets of rules. Playing with the original rules by Sid Sackson is really the only way to go though. Other rule sets kinda water down the game making is less interesting in the end and less competitive.

You should be able to find the original rules at BoardGameGeek.com. Just search for the game Bazaar and find the posts about rules.

Another very popular game that most people probably don’t consider a trading game (at least, at first) is Monopoly. It’s also another game like Bazaar that has suffered from rules changes. You think you know how to play Monopoly? I wonder. Try reading the actual rules sometime.

Check the price of Bazaar on Amazon.

3 thoughts on “Enter the Bazaar”