Go for the Gammon in Backgammon

Backgammon is a dice game that is probably many thousands of years old. Its simple rules, pieces, and elements of conflict are likely what have enabled it to stand the test of time. 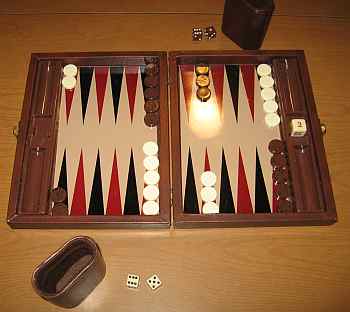 In the fun board game Backgammon, you start with a preset board with 15 tokens, sometimes called stones, on four specific triangles (spaces). Your opponent starts with the mirror image of your setup and each of you moves toward the other. When a piece is all by itself, it is in danger of being knocked off the board and onto the bar, the divider between the left and right sections of the game board.

Your goal is to get all your pieces off the board before your opponent. Assuming your starting setup has 2 stones on the triangle in the far left corner of the board, this means you have to first move all your pieces clockwise into the near left quadrant of the board. Once all are there, you can start to remove them with your dice rolls.

Any of your pieces that were forced onto the bar, have to restart in the far left quadrant. If there’s no room because your opponent has at least 2 stones on each space, you have to wait until he makes a space available.

Then there’s the doubling cube.

You may want to skip this facet of the game at first. The doubling cube is used for wagering. When you think you can beat your opponent, you might advance the cube to its next double – for example, from 2 to 4, or from 4 to 8. If your opponent accepts your challenge, the game continues and whatever was the current wager to be awarded to the winner is doubled. If he declines, you win and receive the prize – whether points or money or whatever you had agreed upon at the beginning of the game.

If it doesn’t end on a doubling challenge, Backgammon ends when one person bears off all of his stones from his home quadrant.

Monopoly had one, Backgammon has two, but Can’t Stop has four dice. So if you want more dice, look to the next post.

Get a backgammon set at Amazon.

One thought on “Roll, Roll, Roll Your Dice – Backgammon”