Collect Card Sets on Your Drive

Drive is a card game for 2 to 4 players that has the feeling of the more well-known Lost Cities but with a twist. Drive is also known as Crazy Chicken. 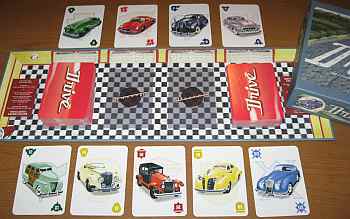 You start Drive with a hand of 3 cards. Each card has a drawing of a classic automobile – thus the name Drive. On your turn, you draw 2 cards from up to four available piles – two draw piles and two discard piles. You then either discard one card to either discard pile or lay down a set of cars of the same type.

If an opponent has already played that type of car, you must play more of that type, and he must discard the set he played earlier.

Get in the Car and Go for a Drive