Uptown is a tile-laying board game where you try to control spaces on the board as efficiently as possible. Try to make your groups of tiles grow amoeba-like hopefully ending up as one huge cell for a win. 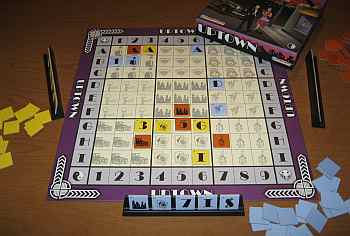 The Uptown game board is divided into 9 pictured sections. The section’s rows and columns correspond to numbers 1 through 9 and the letters A through I.

Your goal is to have as few separated groups of tiles as possible. It’s not always possible to maintain just one group throughout the game, but you can and frequently will merge groups with proper tile placement.

You can also hinder your opponent’s efforts by constructing a chain of tiles that separates two of his groups. You can replace an opponent’s tile on the board with one of your own, but only if his tile doesn’t split his group into two. Replaced tiles count against you if there is a tie for fewest number of groups at game’s end.

Uptown usually plays quickly. There isn’t normally a need for analysis paralysis to set in. The game ends after everyone has played their 24th tile.

Uptown has been renamed Blockers! but I think the rules are still the same.

Like the fun board game Uptown, California is a tile placement board game that feels just a little like Alhambra and is the subject of the next post.

Check the price of Uptown on Amazon.

One thought on “Headed Uptown?”