Can’t Stop is a press-your-luck board game that is a real hoot to play. Children who can work with dice can play as well as seasoned adults who’ve been playing bar dice games (or not) for years. 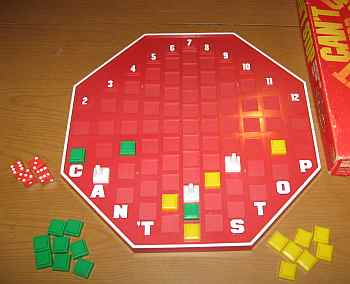 Can’t Stop presents you with an octagonal board reminiscent of the traditional stop sign. Ten columns correspond to the ten numbers you can roll with a pair of dice – 3 through 12.

You take four dice, roll them all at once, then split them into 2 pairs. The total of each pair determines which two (or sometimes one) columns you will advance two of the three the white markers on.

As long as you roll at least one pair that matches one of the columns in which you have a white marker, you may continue to play. If your roll cannot be made to match, you lose any gains you made that turn.

At any time, you may decide to stop rolling and replace the white markers with tokens of your own. These tokens will never be lost unless someone else advances up a number column to the very top. When someone does make it all the way to the top, that number is no longer available to any player.

Be the first to cap off 3 of the columns and you win.

The numbers that are statistically easier to roll, like 6, 7, and 8, are in the center of the board and have longer columns. Conversely, the difficult numbers, like 2 and 12, are at the far left and right and have short columns. It all balances out very nicely.

Sometimes you feel you’re “on a roll” and just Can’t Stop. Then comes that “once too often” roll and you lose it all. Tons of fun.

Check the price of Can’t Stop on Amazon.

4 thoughts on “You Just Can’t Stop”