Relationship Tightrope Is a Good Game in a Bad Package

Relationship Tightrope is a very good card game that desperately needs a new theme. Any takers? [Update: See the comments section below for a recent re-theme by the original designer.]

The current theme involves keeping your life and interactions with other – especially your significant other, should you have one – in balance. Supposedly it’s like walking a tightrope high above the ground. One slip and you lose. 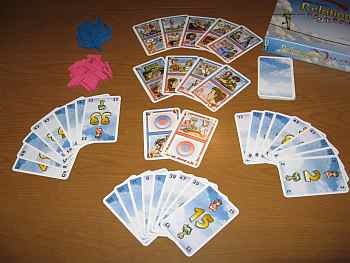 One slip in Relationship Tightrope won’t necessarily lose the game for you, but there is a kind of balancing act you’re performing. It has more to do with math though than your personal relationships.

Relationship Tightrope consists of two sets of cards showing lots of pink and blue and sticks of two colors – more pink and blue. (There’s the awful theme showing through again.) The larger set of cards are numbered from 1 to 50 and are dealt 9 per player. The smaller set of card are numbered 1 through 9 – the Relationship cards – plus two zero cards – the Instant Forgiveness cards – one blue, and yes, one pink.

After hands are dealt and the small deck of 11 is shuffled and placed face down on the table, you flip over the top card for all to see. The first player plays a card from his hand to the table. Other players do the same in turn. Whoever played the highest number takes blue sticks equal to the number on the Relationship card. Whoever played the lowest takes that number of pink.

You play as many rounds as there are players, which can be from 3 to 5. Scores are cumulative. If your total for a round is zero, you can delete your previous high score.

You can probably see a good tactical game in Relationship Tightrope here. Don’t let the pink and blue or the pictures on the cards turn you off, which unfortunately has happened to some degree with some I’ve played with. I’m not sure what theme would make this card game better, but there has to be one out there somewhere. Maybe you can find it for us.

Another good card game like Relationship Tightrope is Flaschenteufel, which translates from the German to The Bottle Imp (literally the bottled demon). Flaschenteufel might permanently twist your brain though if played often enough. You could use a good brain twist, you say? See the more here.

Check the price of Relationship Tightrope on Amazon.

Relationship Tightrope: Too Much Pink?

3 thoughts on “Relationship Tightrope: Too Much Pink?”