Flaschenteufel (aka The Bottle Imp) is based on a short story by Robert Louis Stevenson about an imp and a bottle. A cool bonus with this fun card game is that the full story is included in its own booklet. Even if you don’t buy the game, read the story. 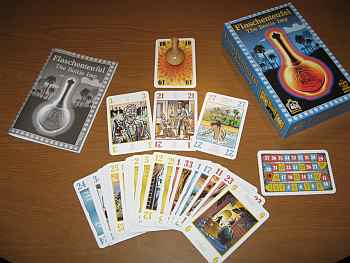 Flaschenteufel consists of a deck of 37 cards (numbered from 1 to 37) and a wooden bottle. The cards are divided into 12 red, 12 blue, and 12 yellow cards plus the starter 19 card.

You deal the 36 cards to each player and place the 19 under the bottle in the center of the table. Each player discards one card face down to form the Imp’s trick. The points in this trick will be negative points for the holder of the bottle at the end of the round. Then you give one card to the players on your left and right and receive cards from them.

During the main portion of the game you take tricks. The real trick is that the highest card is not necessarily the 37 (if it’s even in play). If everyone plays cards higher than the card under the bottle, the highest number takes the trick.

Thus the value of the bottle is always getting lower and is always getting harder to give away. If you are stuck with it at the end, any points you have collected are ignored, and you get the Imp trick as negative points instead.

Flaschenteufel is played over several rounds to an agreed upon total such as 500.

Unlike Relationship Tightrope which needs a new theme, Flaschenteufel fits its theme perfectly. Mu and More is a collection of 5 card games that aren’t as closely connected to a theme but are fun nevertheless and are the subject of a future post.

Check the price of Flaschenteufel on Amazon.

One thought on “Flaschenteufel – The Bottle Imp”