Tichu is a fun card game for 4 players. Technically you can play it with other numbers of players, but Tichu really was designed for exactly 4 players with partners sitting opposite each other. 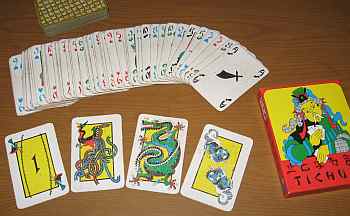 When you purchase the standard game of Tichu, you get 2 identical decks of cards. That is, the faces are the same, but the backs are different so you don’t get them mixed up. The reason for 2 decks is so that the game can move along more quickly from one hand to the next.

Typically you play to 1000 points, so you will need to play several hands per game. All 56 cards are “dealt” each hand. Traditionally the deck is set in the center of the table, and players draw cards from the top in turn until all cards are gone. This allows you to pause before picking up your ninth card in case you want to call a special hand known as a Grand Tichu.

If you end up going out first in a Grand Tichu hand, you score lots and lots of points – 200, to be exact. The catch is that, if you fail, you lose just as many.

How Do You Play Tichu?

A Tichu deck is made of 4 suits with values from 2 through Ace. The lead player must play one of several combinations of cards face up in the center of the table, or he may play a single card. Possible combinations are these:

Whether a single card or one of the combinations is played, the next player must make the same type of play or he may pass (even if he could play). If he plays, his single or combination must be better than the previous cards played. When all have passed, the winner take the trick home.

There are 4 special cards that need special mention. The Mah Jong (or bird, or one) determines who plays first each hand. The Phoenix may be used as a joker or as 1/2 a rank higher than the previously-played single card. The Dragon is the highest single card in the deck. The Hound is only used to pass the lead across the table to your partner.

Tichu is very much a card game of skill with a bit of bluffing from time to time. Try not to let your opponents figure out what cards you have and let your partner do some of the trick taking for your team. Do so skillfully and you’ll have a great time playing Tichu.

Check the price of Tichu on Amazon.

I Can Teach You Tichu

One thought on “I Can Teach You Tichu”