Mu and More Is a Collection of Card Games 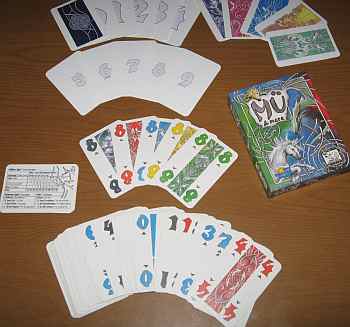 If you’ve never played Mu (also known as Mu and More or Mu and Lots More) before, you will get more than you realize in a small box. Mu by itself would be a great value for the price, but you can play 4 additional games with the same deck of cards…

In the game of Mu, all cards are dealt (to the 4, 5, or 6 players). First there is a bidding round. You may bid any number of cards by placing them face up on the table in front of you. The player who ends up bidding the most cards, after all players have passed, becomes the Chief. The player who bid the second most cards is the Vice.

The Vice first chooses a trump which may either be a color or a number. The Chief then may elect to also choose a (different) trump – again, a color of number. Then the Chief chooses a partner, other than the Vice.

Then follows the trick-taking phase. The Chief leads the first trick. You must follow suit if possible. Otherwise you may play a trump or any other card. Cards may either be played from your hand or from the cards used for bidding which are still face up in front of the bidders.

The Chief’s trump is highest. The Vice’s trump is next highest. If the Chief chose a color trump and the Vice chose a number trump (or vice versa), there will be at least one card that is a double trump. Such a card beats all other trump.

When all cards have been played and tricks taken, scoring is calculated. You get points for each triangle you collected in tricks you won. The Chief and his partner may also get bonus points if they achieved their team goal which is based on the number of cards that the Chief alone had bid.

Mu requires you to think differently, as it should, about taking tricks compared to other trick-taking card games. The other games you can play with the Mu deck are also easy to learn and fun to play. If you like unusual card games, check out Tichu too.

Check the price of Mu and More on Amazon.

Mu and More Than You First Thought

One thought on “Mu and More Than You First Thought”