Use Your Powers of Deduction, Then King Me!

I haven’t played checkers in many years, but I can still recall happily calling out, “King me!” as I moved my checker onto the far row. King Me! – the board game – doesn’t really have anything to do with that classic board game, but you might find it even more enjoyable than a game of checkers, especially if you have a few friends to play with. 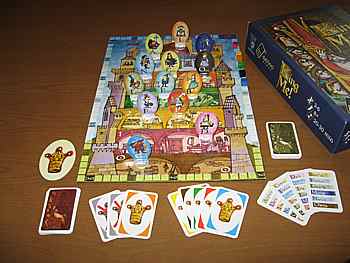 King Me! is a board game of bluffing and deduction for 3 to 6 players. There are 13 candidates vying for the throne.

Apparently the inhabitants of this kingdom are so enlightened that they accept ladies as king.

You have a particular cast of characters whom you want to succeed, according to your secret goal card. Each player has one of these cards, and each one is different. It shows the candidates you want to be king or at least to be high up on the ladder of accession to the throne when someone is crowned king.

To determine the king in King Me!, you get a hand of voting cards. One of them is a “Yes” card, and the others are “No” cards. After semi-randomly placing the characters on the board, you move one of them up towards the throne. If someone moves a candidate from the Nobles row to the throne, it’s time for a vote.

You and every player secretly choose a “Yes” or “No” card and reveal them simultaneously. If everyone votes “Yes”, a new king has been crowned and the round (1 of 3) ends. You then score points based on where the characters on your card are found on the board. The higher they have ascended, the more points you get.

During the King Me! voting phase, whoever votes “No” loses their “No” card. The round continues until everyone votes “Yes”, as mentioned earlier. If you vote “No” several times, eventually you’ll be left with only your “Yes” card and no options for voting other than positive.

Timing the use of each type of card is key as well as trying not to give away which characters you want to still be on the board when the round ends. A kingly candidate who is denied kingship is removed from the game for that round. If he was on your card, you score nothing for him.

After the 3 rounds of King Me!, the player with the highest score is declared the winner. In the case of a tie, the winner is the one with the most characters still on the board at the time.

Get King Me! at Amazon.

It’s Not Checkers, but King Me!