Nameburst is a fun family/party game for 3 to 10 players. It plays better with fewer players, because you don’t have to sit around as long waiting for your turn and you get more turns per game as well. 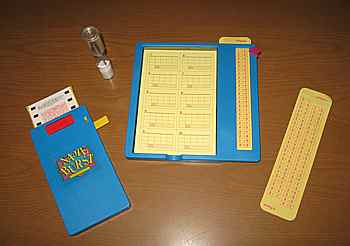 Nameburst works extremely well with players who know each other very well – members of a family, for example. The reason Nameburst plays so well within a family is that each member knows the interests, hobbies, friends, quirks, etc. of each of the other members. This knowledge can be used to the player’s advantage when giving clues.

That said, Nameburst should play almost as well amongst players who know very little about each other – as long as that’s true about all of the players. Trouble might arise if two of the players know each other very well, but no one else does. I think that would give those two an unfair advantage over the rest of the players.

If you like Nameburst, you might also like Outburst. The main bits in Nameburst are the cards, which each contain the names of 10 relatively famous (real or fictional) people, and the card holder which allows you to (fairly) easily read the cards. Outside the holder, most people won’t be able to read the names on the cards because they are obscured through coloration. The card holder has a red, plastic filter which lets the names show through. Older eyes will still need a good source of light to see them well.

Other bits include a sand timer, score pad, and round tracker which tells who should read the names and give the clues to whom. To give clues in Nameburst, you’re not limited to a single word as in Password. You can speak freely, but you’ll want to do so quickly because of the sand timer. About the only thing you can’t say (other than the name itself or any part of it) is something like this: “It rhymes with jumbo.” (Useful if the answer was Dumbo.)

The official rules state that, for each round and 10-name card, you may pass on a name once without penalty. If you pass on subsequent names, you lose a point for each. We threw out that rule long ago and eliminated any penalty points. Scores are still generally in the 4 to 7 point range per card.

Both the reader/clue giver and the guesser receive 1 point for each correct name guessed. After all rounds on the round tracker have been played, the player with the highest grand total wins. There is no tie breaker, but one is rarely needed.

If you play Nameburst enough, you’ll discover that some names are found on more than one card. We learned that one name in particular seemed to show up more often than others. Ever since, when that name appears, the clue giver simply calls out, “The guy who’s always in here.”