Be Fast and Pass the Trash

Pass the Trash is a children’s dexterity game that’s lots of fun for the young (at heart). Each player uses two hand-shaped paddles – one to advanced the garbage trucks in the center circle, another to shoot his colored marbles up and out his tower and hopefully into one of two garbage trucks without the hole in the bottom. 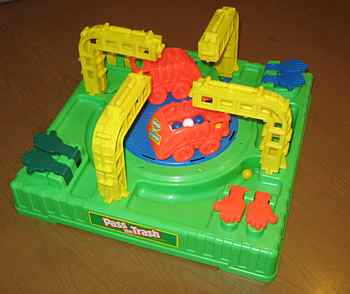 It takes coordination to move and shoot at the appropriate time. Doing so incorrectly is all part of the fun though. Adults, who don’t try too hard, can have lots of fun playing Pass the Trash with their children too. You might try giving the child(ren) fewer marbles than the adult(s) as an equalizer.

The first player to get rid of all the marbles in his marble track (that feeds the shooting tower) is the winner. Pass the Trash plays so quickly that children will want to play it over and over again in one sitting.

Hitting the paddles causes quite a ruckus and children’s voices will probably add to the din, so don’t plan on listening to anything else in the same room while Pass the Trash is going on.

Pass the Trash comes with two guard rails for play with less than four players. You insert them on the rim of the quadrant(s) of the center circle where no one is playing. This prevents (generally) marbles from rolling into the tracks that no one is using.

The pieces are sturdy but do have a few small bits that can break off if mishandled – such as the inserts on the guard rails. The marbles are plastic (not glass). If any get lost, you may have difficulty replacing them. Optionally you could have everyone play with fewer marbles to even it out.

Pass the Trash is a great game for kids who have the coordination to handle the paddles. Be prepared for the racket so you can enjoy it with your children.

Get Pass the Trash on Amazon.