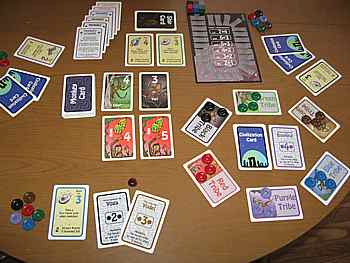 Yes, Monkeys on the Moon is a silly name.

Monkeys on the Moon? Seriously? Obviously not. Still, you’d think they could have come up with something less silly and more appropriate to make the

Well, no, but that’s part of the fun, if you’re into that kid of silliness.

The theme of Monkeys on the Moon will likely turn some of you off from the start. But if you can get past this ridiculous theme, there is a good game in there.

Monkeys on the Moon suffers from a strange title and cheap bits, but I think you can still enjoy it due to the strategy involved.

How Do You Play Monkeys on the Moon?

There are 6 tribes (colors) of Monkeys on the Moon. Your job is to get as many of them back to Earth as possible. If you can do that by filling a spaceship with monkeys all from the same tribe, so much the better.

Why? I dunno. And I guess it doesn’t really matter. It’s just part of the theme. It gets you more points, so it’s a good thing.

Every round, you try to move one of the tribes (colors) forward on the scoring track. If there are coins (that is, buttons) along your path, you take them for use as money later.

The tribe you advance likes you for doing so. Rival tribes do not. Rivals, which are the color opposite on the civilization circle (see lower right in the picture above), demand you pay them 1 coin. If you can’t afford the price, you have to take their scorn card!

In the next phase, you bid for monkeys in the pool. Announce the monkey up for auction and start the bidding. You bid with the coins (buttons). If you have a coin of the same color as the monkey, it’s worth 3. Other colors are worth 2.

If you win a monkey, you put him in your spaceship. If his color matches the color of your ship, nothing happens until the ship reaches its capacity (shown on the ship card).

When your ship is full, it launches, taking all monkeys aboard. You keep these cards for end game scoring. If you win a monkey not of the appropriate color, the ship launches without that newcomer. You keep the monkeys that were already on board.

Monkeys on the Moon ends when all civ cards are gone. You place the tribe stones (that is, the cubes) on the scoring track into the finish circles according to their relative positions. Then you examine the ship and monkey cards you have collected.

Final Thoughts on Monkeys on the Moon

I think it’s worth restating the Monkeys on the Moon is a decent game. There is plenty of strategy to discover and implement.

Don’t be turned away without even trying it due to the goofy name.

Check for the latest price for Monkeys on the Moon at Amazon.

Too Many Monkeys on the Moon

3 thoughts on “Too Many Monkeys on the Moon”