Ascending among the Empires

Ascending Empires is a board game that combines a lot of familiar mechanics in an interesting way that makes for a very fun game that appeals to just about everybody. 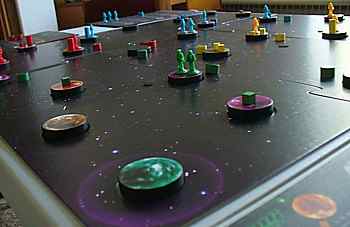 Ascending Empires is, at its heart, a 4x game. That is to say that you will eXplore, eXpand, eXploit, and eXterminate.

To start the game, you simply have a home world with two small starships in orbit around it. You can use these starships to explore other planets. The other planets will be one of 4 colors, each corresponding to a different column on the technology tree shown on your player mat.

Once you discover a new planet, you can land on it, recruit more troops to it, and use these troops to build structures. You can either build a colony (which can later be upgraded to a city) or a research facility.

By building research facilities, you can upgrade your technology and increase your abilities – the strength of your starships, the amount of troops you can recruit, the amount of movement points you have, etc. Building colonies and cities gets you victory points, defense points for that planet, and increases the troops and ships you have in your supply. 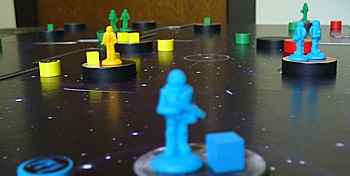 In addition to using your ships to explore the galaxy and find new planets, you can use them to attack other players. You can attack other players ships and their occupied planets. Without getting into the details of combat, the player with the most ships or structures wins.

Alright, sounds pretty simple, perhaps even a little boring, right? So why is this game so much fun? Well that’s simple. You get to flick your ships. That’s right. You take your finger and you physically flick your ships (small cylinders) to move them across the board. This adds a level of skill and an element of chaos to the game.

You never know if your ship is going to land exactly where you want it to go. Perhaps you will accidentally bump into another ship, and you will both be destroyed in a “fiery” wreck. Perhaps you don’t know your own strength, and your ship will go flying off the board and be lost in space. Without a doubt, flicking is what makes this game worth playing and helps level the playing field. Even if a player is an excellent strategist, his plans could all blow up in his face, if he fails to flick his ships skillfully and accurately.

While the flicking element may make the game sound gimmicky, there is enough strategy involved in Ascending Empires (especially in the technology tree) to flesh this game out and add plenty of replay value to it.

The rules are simple and the turns lightning fast, so new players can learn quickly and won’t get bogged down by rules or large amounts of downtime between turns.

There can be some problems with the boards warping and creating inconsistencies that affect flicking. However, I have found that this is not generally a problem, and if there is occasionally a spot on the board that rises up to affect flicking, it affects all players equally and keeps the game fair.

Get Ascending Empires on Amazon.