Cooperation in and around Yggdrasil

Yggdrasil is not for the faint of heart. It is a cooperative game for gamers who are looking for a challenge. It also has a great theme and artwork that help make it more than a game; it’s an experience. 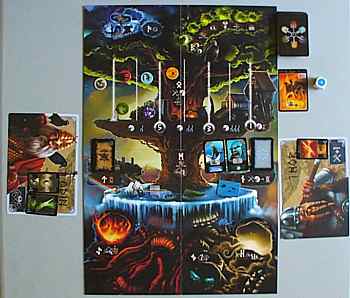 In Yggdrasil, you each take the role of a Norse god – Odin, Thor, Tyr, Frey, Heimdall or Frejya. Each god has a different special power that you can use throughout the game.

Players work together in Asgard to defend Yggdrasil – a huge tree in Norse mythology – against an onslaught of enemies, in particular, 6 monsters and evil beings – the wolf Fenrir, the serpent Jormungand, the Fire Giant Surt, the Goddess of the Dead Hel, the traitor Loki, and the dragon Nidhogg.

On each turn, you flip over a card from the enemy deck. The enemy that is revealed moves one step closer to Yggdrasil and also uses their special ability.

Then you get to choose 3 of 9 possible actions. These actions may build up your supply of Vikings to help fight against the enemies, buy weapons from the Dwarven forge, use an action to attempt to push back one of the enemies, and more. 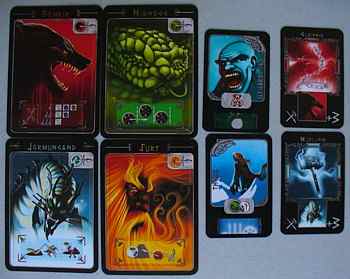 The enemies just keep on coming until you make it through the entire deck of 42 enemy cards. The difficulty level can be adjusted by swapping out some of the normal enemy cards for either “Angry” enemy cards or the fearsome Ragnorak cards.

The beautiful artwork of Yggdrasil helps immerse you in the theme. The game scales well and gets harder with more players.

If you’re looking for a light or lighthearted game, Yggdrasil is not for you. This game is tough. Very tough. Winning once does not guarantee that you will be able to win every time. Especially with the ability to increase the difficulty level, there is plenty of replay value.

Get Yggdrasil on Amazon.

A Board Game Up the Yggdrasil Tree