Use Your Imperial Power to Win

You might be pretty sure you like Imperial the first time you play it, but you probably won’t get it until the second time you play. It’s then that you’re more likely to fall in love with it. 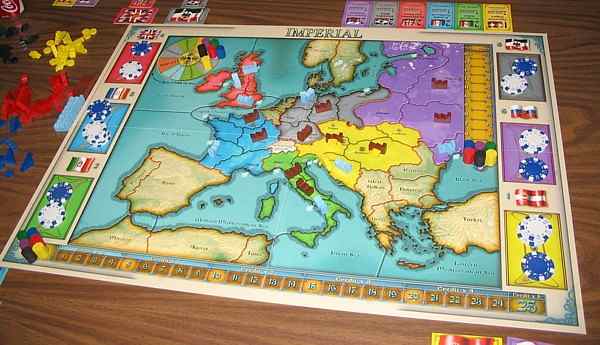 Imperial is very difficult to explain, so I’m not going to try to go into detail here. Suffice it to say that its mechanics include area control, commodities (bond) trading, and variable phase order. It also has a rondel, which I think is one of the coolest inventions ever in the board game universe.

You play an investor who should win if you make wise investments, control the most powerful nations, and employ the best of your diplomatic skills. No randomness is introduced by cards or dice, so if you plan and strategize well, you should succeed.

Imperial takes about 2 hours to play. It can be played with 2-6 players. Be prepared for some down time, especially if one of the players controls a lot of territory.

If you think Imperial sounds like a fun board game, you might also look at Imperial 2030, a re-implementation that is a complete game in its own right.

Check the price of Imperial on Amazon.

Imperial – A Board Game You’ll Love the 2nd Time