Preamble: I couldn’t believe I hadn’t written a review of Puerto Rico in the many moons that I’ve been writing reviews. I searched but couldn’t find one, so I decided the time was right. Here it is. 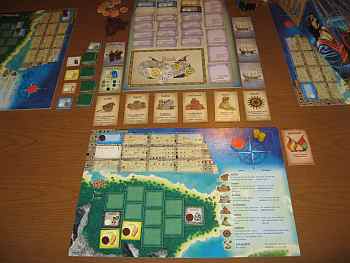 When I first got Puerto Rico, I didn’t think that much of it after my first play. I think I had heard and read too much hype about it and was kinda disappointed. However, I’ve learned that Puerto Rico is one of those games that gets better the more you play it.

There are many strategies to pursue (despite what some have claimed about its tendency to feel scripted) that you can only discover the more you play it. You may see a few paths to test after your first few plays, but during those plays, you’ll discover even more. And so it goes.

Puerto Rico has at its center a mechanic called variable phase order. There are at least 6 phases, or roles, to choose from. The thing is that they aren’t played in the same order from round to round. You get to choose. It’s your task to pick a role that will help you more than the other players – especially the player to your immediate left.

You collect coins and crops to build buildings and make shipments to the New World all with the goal of earning victory points in mind. You get points for the buildings and for shipping those crops of corn, indigo, sugar, tobacco, and coffee.

Puerto Rico has been so popular that it has spawned 2 similar card games – San Juan and Race for the Galaxy. You may like those games if you find Puerto Rico attractive. And if you like those, you’ll probably really love Glory to Rome. Give them all a try as soon as you can.

Check the price of Puerto Rico on Amazon.

Puerto Rico – One of the Most Popular Board Games of Ever