I’ve played Glory to Rome about 150 times. I only mention this to prove that it’s one of my favorite games of all time. Is it one of yours too?

This past weekend I played it twice back-to-back. It was like visiting an old friend, since I hadn’t played it much lately. Both sessions were 3-player games involving my wife and another human friend we’ll call Brock. 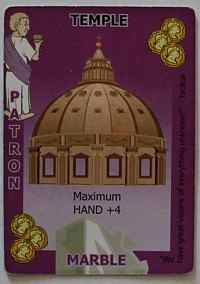 My wife has probably played Glory to Rome about 150 times as well because we have often played it together – many times with just the two of us.

Brock has played it a few times in the past, but he wanted to refresh his memories of it to see if it would make a good purchase.

Both games ended when the in-town foundations were exhausted. No one attempted to end play with a Forum or a Catacombs, and even though I completed a Temple fairly early in the first game, the draw pile still had plenty of cards in it.

So I won the first game on straight up points because I had the most valuable buildings completed.

Since Brock wasn’t feeling comfortable with how he played that first game, he requested a second game immediately. We were glad to oblige. 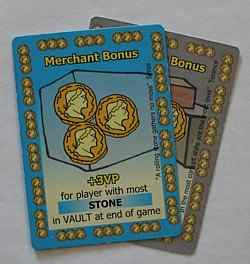 An Alternate Path to Victory

Two things stand out it my mind about the second game.

First, I maxed out my clientele at 7 and was having trouble initiating more construction projects.

Second, because of the above, I decided to maximize the contents of my vault. I managed to get 1 gray and 3 blue cards tucked under the right side of my mat before the foundations were depleted. That gave me the 3-point bonuses for both of those colors and helped greatly towards my second win.

The Infrequent Win and Rare Double

I don’t know what my exact stats are, but I don’t think I win games – any games, not just Glory to Rome – very often. So when I manage back-to-back victories, I’m really pleased.

This day I was really pleased.

When was the last time you won 2 in a row – whether the same game or two different titles? Did you celebrate or is that too common an occurrence for you?

Check the price of Glory to Rome on Amazon.

One thought on “GLS Plays Glory to Rome FTW”