Steam down the Tracks

There are dozens of board games with a railroad theme. There’s the popular Ticket to Ride family of board games. There are the 18** (where ** finishes a calendar year) railroad games. Then there are Steam, Age of Steam, and Railways of the World all three of which were designed (at least in part) by Martin Wallace. 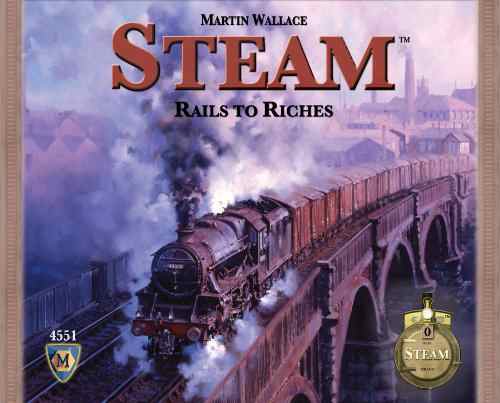 Not surprisingly, since they are all Wallace games, these last three will have some similarities. Steam is actually considered a reimplementation of Age of Steam.

Your tasks in Steam include building railway tracks (no surprise there), using those tracks to deliver specific kinds of goods (cubes) to specific cities that need them, supplying cities with new sets of goods, upgrading your train, and upgrading the cities themselves.

All along the way, you need to maintain your cash flow and accumulate victory points as well.

Truth be told, I’m usually not much of a Martin Wallace fan, but Steam and the related train games are a lot of fun. Steam is quite challenging, so if you want to start with something simpler, go for Ticket to Ride or one of the variations of that basic game instead.

Check the price of Steam on Amazon.

Steam – A Meaty Railroad Board Game