Attempting to Improve on a Classic

Attempting to turn a classic 2-player game, like chess or checkers, into a game for more than 2 players doesn’t usually work. There’s apparently a good reason that those games have come down through the centuries to us as 2-player-only games. 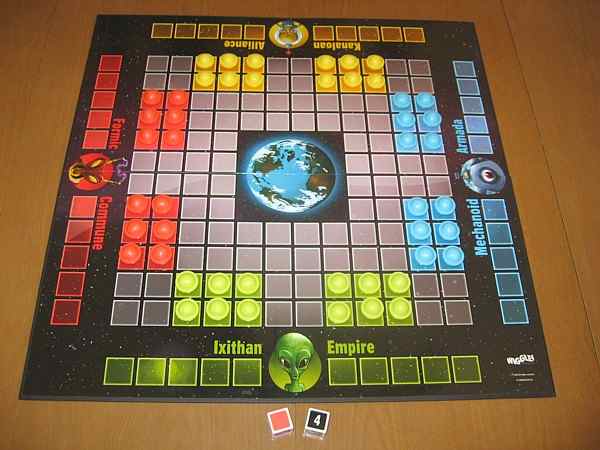 Space checkers, while it can be played with just 2 players, is really intended for 4 players. As such, it’s passable but nothing outstanding. Theoretically you could play it with 2, or even 3 contestants, but I’m not sure why you’d want to. If you’re going to play with just 2 anyway, you might as well play the standard game (which is better). Space Checkers would work with 3, but it would likely feel quite unbalanced. (I have not tried it with three though.)

The best part of Space Checkers might be the board and the bits. The colors are bright and attractive and match from board to bits to dice – something that is not always the case in a board game. The “flying saucer” tokens are well-made and have a nice heft to them. It might have been nice to have the four alien races stamped on the top of each color, but I suppose that would have added to the cost.

The biggest problem I have with the game is not the play per se; it’s with the unclear rules.

Your goal, as in regular checkers, is to jump over and capture as many opposing tokens as possible. When you gather 10, you win. The rules do state you can’t jump over 2 adjacent tokens of the same color, but what if they’re different colors? And when you jump, does the “skipped” space count as part of your number-die shake?

Backing up a bit. On your turn you roll 2 dice. One tells you how far to move and the other tells you in which direction to go. You move toward the home area of the color rolled on the second die.

If you reach the edge of the board, you “warp” (i.e. wrap) to the same row or column on the opposite side and continue. If you advance into the 4 rows opposite your home area, your space ship becomes wild, meaning it can move in any direction regardless of the die roll.

When your token is wild, must it still move in a straight line as it would when following the color die? In a 2-player game, you might roll one of the non-playing colors. This would probably be fruitless most of the time.

Around our house, we’re not big fans of regular checkers to start with, so we didn’t care all that much (especially with the rules questions) for Space Checkers. But if you’re a checkers fan, you might have a good time with Space Checkers too, but it’s not likely.