Burger Munching Fun for the Young at Heart

Pop the Pig is only for the very young who can understand the rules as taught by someone who can read. 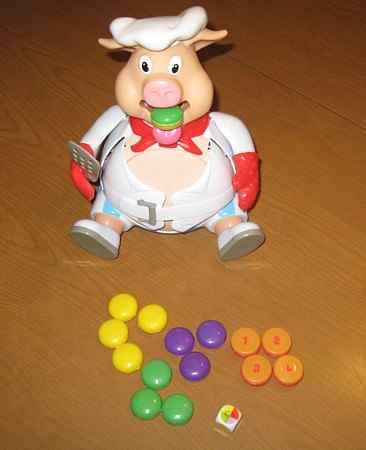 Pop the Pig is almost more of a toy than a game. On your turn, you roll a special die that has one of four colors, an X, and a side showing all four colors.

If you roll one of the four colors you stuff a sandwich (i.e. burger) of that color into the pig’s mouth. Before doing so, you look at the number (1 through 4) on the back of the burger.

After you feed the pig, you press down on his head the number of times indicated on the burger. This action will inflate the pig’s belly, eventually causing it to burst ending the game (or the possibly the round).

If you cause it to “pop”, his belt will unbuckle itself and his arms will fly open. (His stomach doesn’t actually pop like a balloon.) If you roll the X, you get to pass. If you roll the multicolored side, you must choose wisely from one of the four colors of sandwiches.

The player who causes the pop is the loser.

The back of the pig has an opening for retrieving the burgers. You deflate his stomach by twisting his tail.

Pop the Pig’s components are top notch. It would take quite the boisterous youngster to break it. 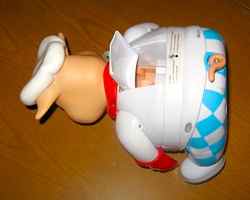 The rules are simple enough for a 4-year-old to learn, as long as they know their numbers from 1 through 4.

Those young enough to enjoy it may find it more fun to “pop” the pig than to avoid the same. You may have to play with house rules declaring the popper the winner.

If there are more than two players, there would be player elimination. This is probably not a good idea for the very young.

Check the price of Pop the Pig on Amazon.

A Game for the Little Ones – Pop the Pig