Onirim (which I think is pronounced oh-ner-eem) is a solitaire card game with dream-related artwork. Actually, you can play cooperatively with two, but it seems to me that it was really intended as a solo game. 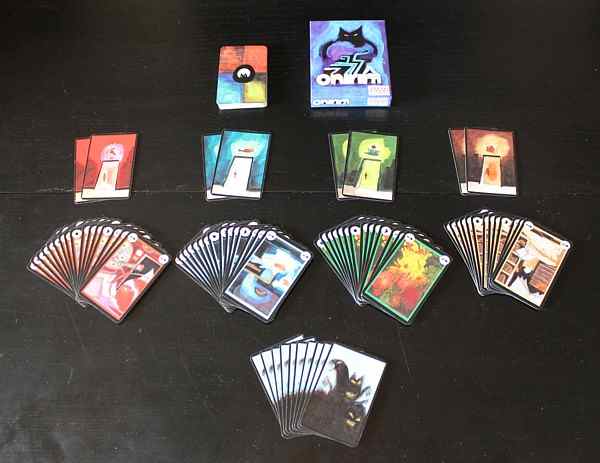 I said Onirim was about dreams. That’s a little misleading. It’s really about nightmares and escaping from them. Don’t let that scare you aware though, since the theme has nothing to do with the game play.

Onirim comes with a base deck of  76 cards. There are 58 labyrinth cards in red, blue, green, and brown. Each of these sets consists of sun, moon, and key cards which, when played strategically, should lead you to play the 8 door cards (two of each color). Playing all the doors before the game ends is your goal. Finally, there are 10 dream cards all of which, in the base game, are nightmares.

On the table you will designate spaces for the draw deck, the discard pile (for cards permanently removed from the game), the limbo pile (for cards temporarily discarded, later to be reshuffled into the draw deck), the doors, and your labyrinth (probably closer to you than all the other spaces). 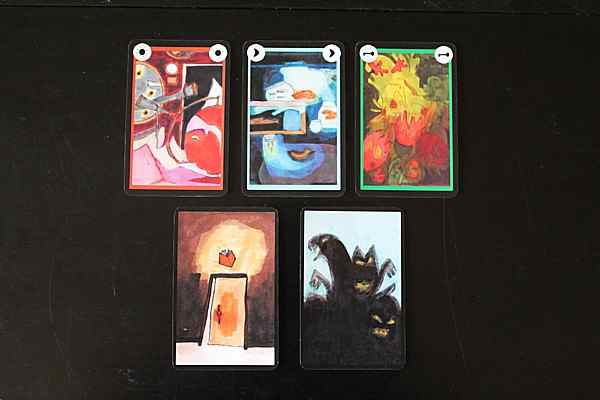 You start with a hand of 5 cards. A turn consists of playing a card or discarding (probably only if you have no legal play), drawing a card, and possibly shuffling the draw deck and any cards in the limbo stack.

You play a card to the labyrinth row. The first card can be any sun, moon, or key. The next card must be one of a different type (sun, moon, key). If you manage to play 3 cards in a row that are the same color, you get to search through the draw deck and remove 1 door of the same color, placing it in the door space. You then shuffle the deck.

Since your goal is to find all 8 doors, playing consecutive cards of the same color is a key strategy. Another way to play doors is by drawing them from the deck. However, you must have a key card in your hand of the same color or the door will go to the limbo stack. Note: There are only 3 keys in each color, so they must be used wisely.

Another use of the key cards is to trigger a prophecy. You can discard a key (instead of playing to your labyrinth) which allows you to peek at the top 5 cards on the draw deck. You must discard (permanently) one of these cards, but you get to rearrange the other 4 cards as you wish before replacing them on the draw deck.

Then there are those nasty nightmare cards. If you draw one of those, you discard it and must perform one of these 4 actions.

This is normally a difficult decision to make and will vary depending on your current situation relative to the rest of the game.

You win Onirim if you reveal all 8 doors before the deck runs out. If you have to draw a card to replenish your hand and there’s nothing left in the deck, you lose.

That in itself is a very interesting game, but there are “expansions” included in the original game box that make it even moreso and increase the difficulty. I haven’t tried any of the expansions yet, but I certainly plan to give them a go once I feel comfortable playing basic Onirim. Maybe someday I’ll even try the co-op version with one of my gamer friends.

Onirim packs a lot of punch into a small box. If you like playing solitaire card games of any type – Klondike, Freecell, etc. – I’m almost certain you’ll enjoy Onirim too.

Check the price of Onirim on Amazon.