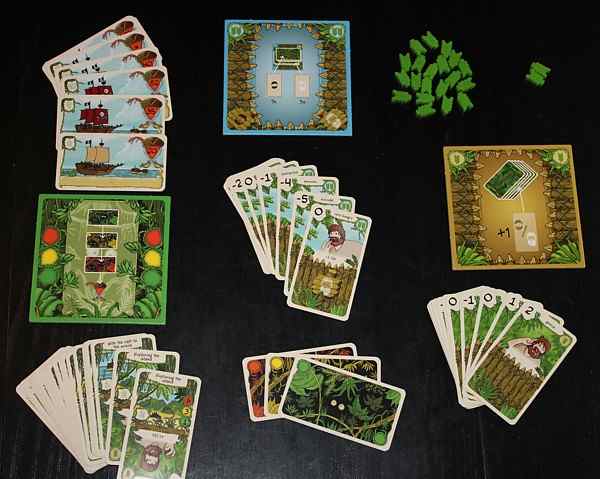 Friday, the deck-building card game, is ostensibly about Robinson Crusoe’s aide named Friday. You try to help him survive against the dangers of the jungle and, if he makes it through that, against 2 fearsome pirates.

As you can see above, Friday comes with many cards, 3 useful (but unnecessary) boards, and a pile of ferns or fronds which represent life points.

One of the sets of cards presents the hazards you (as Friday) must defeat. You select 2 of them each turn and decide which one you want to face. The other card goes into a discard pile for the next round. If you defeat your chosen hazard, you get to flip it around and make it serve you as a new fighting card. Otherwise, it goes into the hazard discard pile and will appear again in the next round.

You must go through the hazard pile 3 times. Each time through, the hazards become more difficult. Using the card shown in the picture as an example, you can see a green 1, yellow 3, and red 6 on the upper right section of the card. If you faced this hazard the first time through the deck, you would have to defeat it by playing at least 1 point of fighting cards against it. If faced in the second round, it would take 3 points, and in the third round it would take 6.

Each time you exhaust your fighting card deck, you must add one aging card (all are very bad) to it. You’ll want to get rid of them as they randomly appear after your deck is reshuffled.

Life points are gained and lost in various ways. If you run out of them, you obviously lose. If you can stay alive through the three rounds of hazards followed by the two pirates, you win.

It’s a Challenge, But Is It Fun?

The answer to that question is yes.

Friday presents some tough decisions, which is something that I think always makes for a good game. Do I spend more life points to defeat the hazard, or do I give up on this one and live to fight another more significant battle? Do I take a chance on the next fighting card, or do I pass on it because I’m afraid it might be a dreaded aging card?

For those times when you can’t find someone else to play a good game with, Friday will occupy you for about half an hour. Maybe you arrived late to game night and everyone else is already playing a game. Break out Friday and enjoy a challenge every bit as fun as many multi-player games.

Check the price of Friday on Amazon.

Friday – A Challenge Any Day of the Week