It’s not often that I know I’m going to love a game after just a few minutes of my first play. I had that feeling a couple of turns into Suburbia.

I traded Notre Dame for both Suburbia and Sneaks & Snitches (another cool game). This is the best board game trade I’ve made to date.

Suburbia is a euro-ish game that has what many euros do not – an integrated theme. Some have compared it to the video game Sim City. Having played that game just a little many years ago, I can agree with the comparison.

All players start with the same suburban setup; your borough consists of a green suburb hex tile, a gray community park hex tile, and a yellow heavy factory hex tile, vertically arranged in that order. 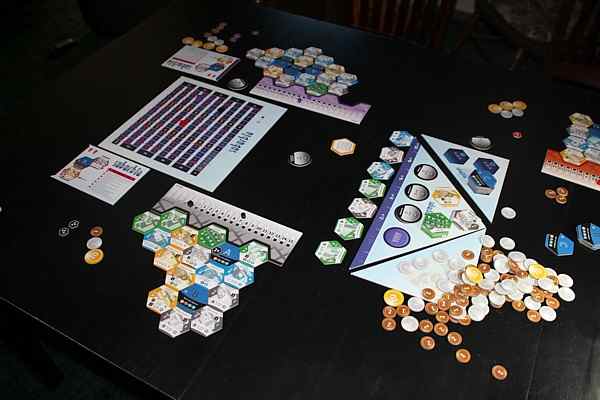 Tiles in your borough can affect each other, and they tend to do so as you would expect in real life. This is what I mean by the theme being integrated into the game. Tiles you purchase and play in your borough may also affect other players’ boroughs.

Tile purchase and play will usually affect your cash flow and your reputation (victory points) either positively or negatively. You normally attempt to increase both your income (so you can purchase more tiles) and your reputation (so you can win the game) while striving to attain publicly shared goals and a personal goal. These goals, which are worth from 10, 15, or 20 points each are crucial to winning the game.

I said that you’ll normally want to increase income and reputation, but it’s possible that one of the goals will reward you for the lowest income or cash on hand or the poorest reputation at the end of the game. The public and private goals are selected at the beginning of the game from a large pool of possibilities. These goals come in pairs of opposites, so it’s possible that one of the available goals for a given game and it’s opposite are both in play at the same time. You’ll obviously have to choose which one to shoot for, since you won’t be able to attain both in that (probably rare) case.

During the course of the game, you’ll want to stay within 10 or 15 points of the leader so that, when you cash in on your goals at the end of the game, you still have a shot at winning.

I expect to get a lot of replay value from Suburbia because there are many more borough hex tiles and circular goal tiles provided than are actually used in any one game.

As of this writing, I have only taught Suburbia to a few people. I can hardly wait to teach it to the rest of my family and friends because I’m almost certain all of them will enjoy it. If you like Sim City or other thematic euro games, I’m sure you will too.

Update: This game quickly became my wife’s favorite for 2014. As of this update, we have played it 93 times. We also picked up (and now always use) the Suburbia Inc expansion which adds new tiles, borders, and more.

Check the price of Suburbia on Amazon.

Building in the ‘Burbs – A Review of Suburbia

One thought on “Building in the ‘Burbs – A Review of Suburbia”