Sneak Away with the Loot or Snitch on Your Neighbor? 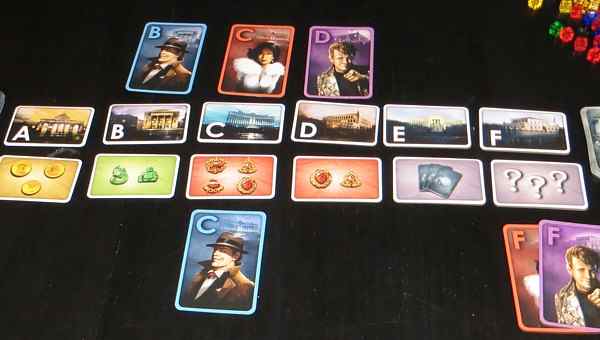 Sneaks and Snitches is a wonderful, short game that you’ll probably want to play more than once per sitting. You should be able to play a game in 20 minutes, unless someone takes too much time double-thinking his moves.

The rules of Sneaks and Snitches can be taught in five minutes even to youngsters.

Your goal is to have the most victory points which are usually mostly earned from having the most cubes in each of four colors – red, blue, yellow, and green. There are also a few cards you can win that have 1 or 2 straight up victory points.

You start the game with 3 random cubes. Depending on the number of players, there will be a row of lettered reference buildings in the middle of the table from A through F, G, or H. Next to each of these cards you place one card from the goods deck. Most of these cards show a number of gems (cubes) you can win.

Some of the cards have the victory points mentioned earlier or abilities like being able to swap cubes or causing your opponents to lose half of a given color of cubes.

You have a hand of character cards (all the same color) that are lettered to match the reference building cards. In each round, all players place two cards face down on the table. One card (your sneak) is used to try to steal the goods card adjacent to the lettered reference building. The other card (your snitch) is used to prevent your opponents from stealing one of the goods cards.

Consider the possibilities you need to think and double-think about!

When everyone has settled on which cards they want to play, all cards are revealed and placed near the reference and goods cards – snitches above the row and sneaks below the row. There can be several situations to resolve in order alphabetically.

If neither a sneak nor a snitch was played for a given letter, the goods card is discarded. If only snitches were played, the goods card remains for the next round. If anyone played a sneak by that letter too, they get nothing. If no snitches were played, but more than one person played a sneak, no one gets the goods, but as a consolation, each gets a card from the gems deck. These cards are kept secret till the end of the game; each one shows a single gem.

The goal is to be the only person to play a sneak for a given letter. Accomplishing that task, you get to steal the gems on the corresponding card (or perform the action or keep the victory points on the card).

In the example above, Cards A and E would be discarded. Cards B, C, and D would remain till the next round, and no one would get the corresponding goods this round. The red and purple players would each get a gem deck card, and goods Card F remains. No one earned any of the goods this round. 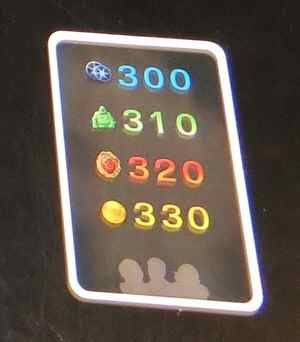 When the gems deck runs out, the game ends. You then determine who has the most, second most, etc. in each color of gems (cubes) and award points based on an end game reference card which also varies according to the number of players. Add up those points and any victory points cards you claimed during the game, and the player with the highest total wins.

Sneaks and Snitches is extremely simple to play yet deviously difficult to play well. It’s almost like poker where, the better you know your opponents, the better you’re likely to do. And yet, even with unknown opponents, you can usually get some idea of which sneaks and which snitches are better to play in a given round.

Then there are those rounds where the choices are deliciously difficult to make. Gah! What to do, what to do…?

This Vlaada Chvátil game is probably not ranked higher on Board Game Geek because it plays so quickly. Most would call it a filler, and it is. But it’s a meatier filler than many and deserves a place on your game shelf.

Check the price of Sneaks and Snitches on Amazon.

One thought on “Sneaks and Snitches – Vlaada’s Almost-Forgotten Game”