A Review of the Fun Board Game Takenoko

From the creator of 7 Wonders and Hanabi, comes an oriental-themed game called Takenoko. I was first attracted to this game by the delightful and well-made bits – the little panda, the Imperial gardener, the pieces of bamboo, and even the large hex tiles which each show a different design.

However, instead of purchasing this game for myself, we gifted it to a friend several months ago. This friend recently returned to our area and brought the game along so we could try it out.

It was worth the wait. 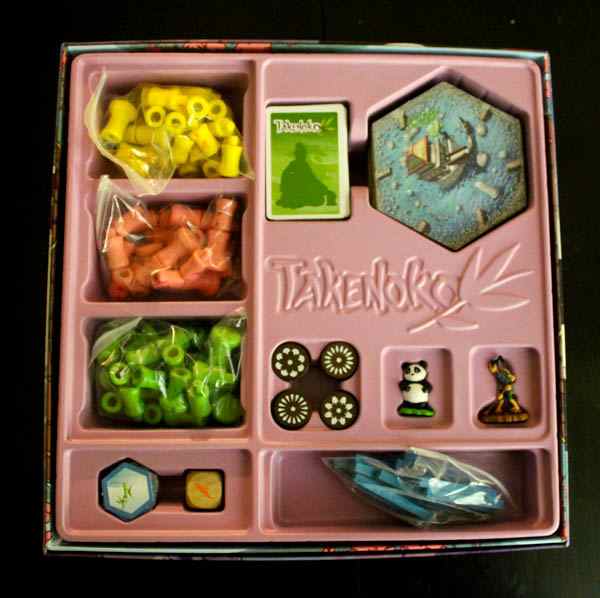 As I’ve already mentioned, Takenoko comes with top notch pieces. They all fit neatly into the box insert (as shown above) which is not the usual black color. It’s a shade of pink or perhaps mauve instead.

We have one small quibble with the bits. Some of the bamboo sections don’t always fit properly (too tight) into the other pieces. Considering the overall high quality of the game and that you’d think all the bamboo pieces would have come from the same mold, this is somewhat surprising. It’s not a major flaw, but we wish you could pop any piece into any other without extra effort.

Those bamboo bits have to fit into each other so that you can create “trees” up to 4 pieces tall. You can see above that there are base pieces at the bottom of each trunk and up to 3 slightly smaller pieces that stack on top of them. The design does work well in that the trees don’t topple over by themselves when at their maximum height. 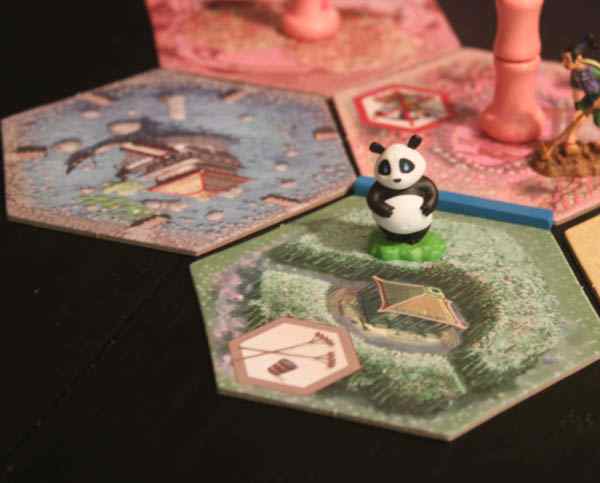 The cute little panda and the gardener are exquisitely detailed and nicely painted.

Your goal in Takenoko is to complete at least 7 objectives (in a 4-player game) as shown on cards. Each card shows either an arrangement of hex tiles, a number of bamboo pieces eaten by the panda, or an arrangement of bamboo trees. When you accomplish a goal, you get the number of points shown on the card. The player with the highest card total wins.

At the start of the game, only the blue pond tile is in the playing area. The panda and the gardener begin the game on this tile too.

Each turn (except your first), you roll a special die, representing the weather conditions, giving you a special action (mostly) in addition to your regular 2 actions. You can see these possible actions on your player board. 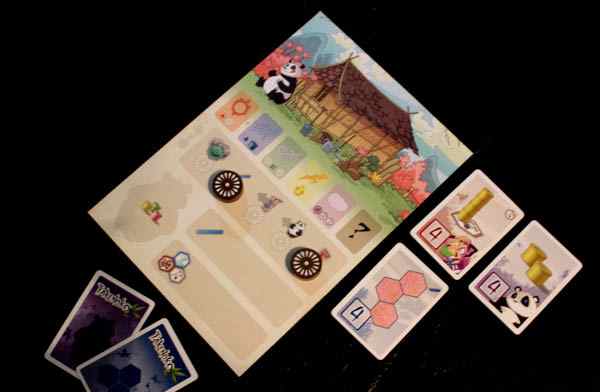 The actions are these:

After performing the special action, you can do two of the following:

The lower areas of your board are for storing bamboo eaten by the panda, storing canals, and storing small hexes.

There are some choices to be made in Takenoko. Most of the time they are fairly easy to make. We decided it helps a lot to have your opponents do a lot of the “work” for you. Let them finish a tile pattern for which you happen to have a matching card. Let them build up just the color of bamboo you have been waiting for.

Even if you don’t end up liking this game, I hope you get to try it some time just to see the pieces.

Check the price of Takenoko on Amazon.

2 thoughts on “Feed the Panda! Takenoko”