I’ve stated before that Wolfgang Kramer is one of my favorite board game designers. He often works in tandem with Michael Kiesling, but for Seeland he teamed up with Günter Burkhardt.

Burkhardt may be slightly better-known for his efforts in designing Kupferkessel Co., Maori, and Darjeeling. 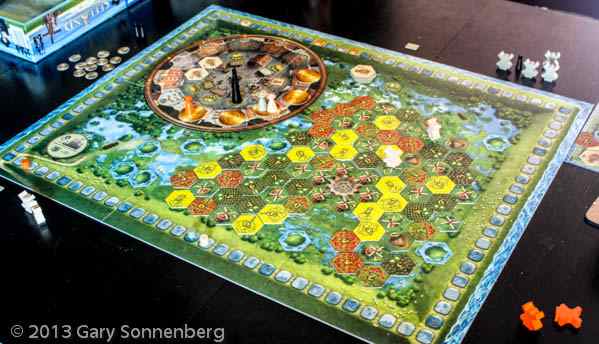 is a Eurogame ostensibly based in The Netherlands where windmills, tulips, cabbages, and rapeseed compete with lots and lots of water – too much water. In theory, you are helping to drain some of this water by the construction of windmills. This allows you to grow crops on the land. If you diversify well enough, you will be handsomely rewarded – perhaps even by a local governor.

The Seeland Game Board

There are 3 main areas that make up the Seeland game board. There is the scoring track around the edge. There is a type of rondel in the upper left corner, and the remainder of the board shows the watery landscape where you will build windmills and harvest crops.

You have 4 windmill markers that you can place onto windmill hex tiles. When such an occupied tile is completely surrounded, it is harvested; that is, you score the points shown on the windmill tile and the surrounding crop tiles. There are 6 windmill hexes printed on the board itself. You pick one of these for your initial windmill marker at the beginning of the game. This marker will only be surrounded by 3 more tiles before it is harvested. When you score a harvest, you retrieve your windmill marker for future placement on a windmill tile later in the game. 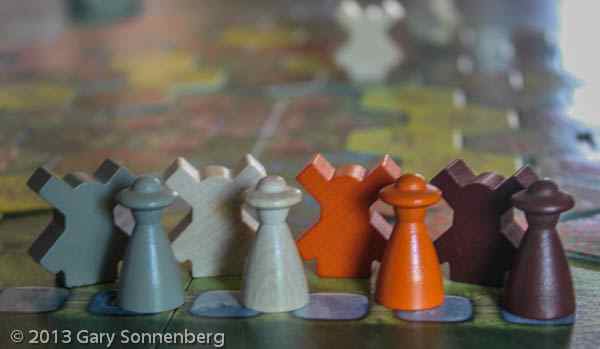 If your harvested area contains only one type of crop, that’s bad news. You score no points – no matter what numbers are on the tiles. If the harvest has two types of crops, you score everything normally. If, however, you were a wise farmer who diversified to the fullest extent and planted all three types of crops, you are rewarded with a 5-point bonus.

When you claim a new windmill tile and place it on the board along with one of your markers, if there are any island tiles adjacent to it, you flip them over. These tiles, which were randomly placed during setup, will either show one of the three crops or a farm (worth zero points). A farm grants you a coin which you can use to take a second turn immediately after your first. (You get one of these coins at setup too.)

Some of the island tiles show a governor pawn in addition to a crop. If you reveal one of these, you place one of 7 governor pawns on the windmill tile that initiated the flipping. When you harvest an area where a governor resides, you must satisfy that governor by equaling or besting the current market price as shown on the rondel. If you do, you get another 5-point bonus. You also claim the governor pawn which counts toward an end game bonus. If you fail to please the governor, you subtract 5 points from your harvest, and the governor moves on the the nearest windmill to perform similar duties there.

So how do you get new windmill tiles, crop tiles, and determine the market value demanded by a governor? That’s what the rondel is for.

How Do You Use the Rondel?

At the beginning of the game, all players have a pawn on the first of 5 large coins located on the outer ring of the marketplace rondel. The inner ring has hex tiles you may claim, another large black pawn used to claim them, and a warehouse space.

All movements on the rondel are clockwise. You move the black pawn to the tile you want to claim. If that is the very next space, you may do so for free. For each hex tile you want to skip over, you must move your colored pawn on the outer ring that many spaces on the large coins. If your pawn gets to the end of the string of 5 coins, you must stop. Thus, if you begin a turn there, you are forced to move the black pawn only one space on the inner circle and take what that space gives you.

If the tile you take is a crop, you must place it next to one of your windmills. If you take a windmill tile, you can start a new area for harvesting as long as it is adjacent to areas already occupied by a crop, windmill, or farm. If you land on the warehouse, you lose 3 points but can move your outer circle pawn back as many as 3 coins.

When the last pawn vacates the last coin, that coin is moved forward to the open space at the head of the string of coins. This changes how far everyone can move the black pawn on future turns. It also changes the market value that the governors are looking for. Each of the outer circle market spaces shows a number (between 16 and 30) that is the value to equal or beat when harvesting a field being overseen by a governor.

When Does Seeland End?

The space vacated by the black pawn in the inner circle of the rondel is refilled from the appropriate stack of windmill or crop tiles found near the top of the board. When one of these stacks is depleted, the game will soon end. When the black pawn is moved to an empty space on the rondel, the game ends. No more windmill scoring is done. The governor bonus is awarded as is another set of “betting” bonuses.

Twice during the game you can place a small special betting token on the space on the scoring track that equals the number of points you just scored in a harvested area. You hope that this score will be your highest all game and perhaps even the highest that anyone scores that game. The highest 4 such bets are given end game bonuses of 20, 15, 10, and 5 points from highest harvest bet to lowest.

The player with the most points is, of course, the winner.

I’m trying to think of how to put this into words, and I’m having a tough time. This doesn’t mean I dislike the game. In fact, the opposite is true. I do like Seeland a lot. I’m just not sure why. It might at this point be just because it’s new to me and doesn’t suck. There’s just a satisfying feeling I get after having played Seeland – win or lose.

I’ve played games with rondels before. Each one works a little differently. Seeland’s rondel continues this pattern. I like the way this one works. There are sometimes tough decisions to make about how far to move around that inner ring. What do I really want? What do I want to prevent the next player from getting?

Some people won’t like the randomness of the island tiles. You just never know what’s going to turn up. For those players, there is another board on the back side (which I have yet to play) that mitigates most of this by revealing what is on those spaces from the start. To me, this takes away a lot of the replayability afforded by the random tile placement of the islands.

Give Seeland a try. If you like Eurogames at all, I feel confident you’ll enjoy this one.

Check the price of Seeland on Amazon.

Seeland – Another Kramer Hit That No One Knows About