From the Designers Who Brought You El Grande

You may have read elsewhere on this site that I really appreciate board games designed by Wolfgang Kramer, especially those he has made in cooperation with Michael Kiesling. The two of them seem to work well together.

So when a local puzzle and game store decided to close up shop and celebrate by having a 50% off sale, I had to pick up Asara (and Seeland) which was designed by the Kramer/Kiesling team. They also created the quintessential worker placement board game called El Grande.

The Asara Game Board

The Asara playing area turned out to be much larger than I first expected. That said, there is really no wasted space; it’s just that there are a lot of bits that need to be displayed. Unless you were going to make the pieces really, really tiny, you have to have a board this size. 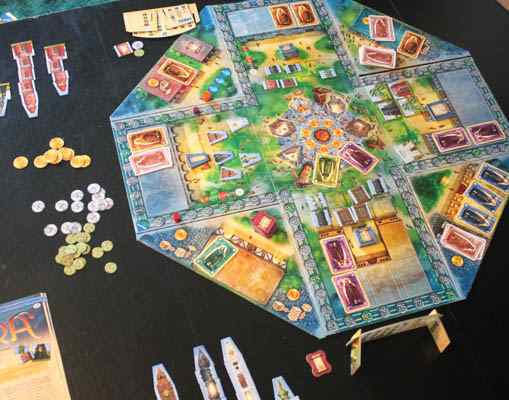 There is no top or bottom to the board, so it doesn’t matter where you sit around the edge. The four extensions of the cross section hold spaces for tiles that you will build into towers. Those areas have four or five spaces where you will place the small cards you must “pay” to take a tile. The cards are essentially workers that you are placing in one of the nine sections of the board. This is, therefore, a worker placement game, even though it might first feel like a card game.

The triangles that fall in between the cross extensions have four more spaces for your cards. In one section you can claim start player rights and bribe the powers that be to take the hidden tile that you want.

The center section of the cross is a circular area for building your towers. There are spaces numbered from 1 through 7 corresponding both to the amount of money you pay and the number of tower pieces you want to build. The number of pieces you build is also the number of points you get for the construction. 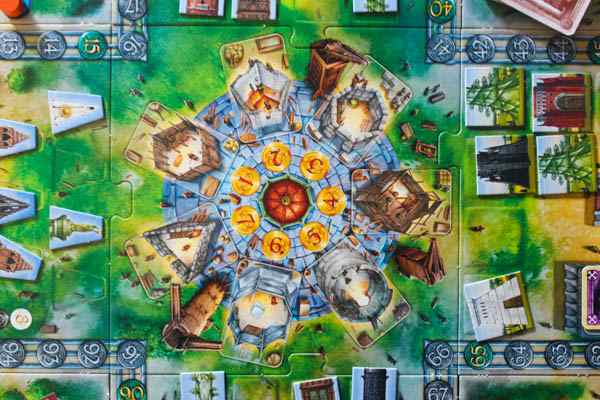 There are four years (rounds) in Asara. At the end of each, you score one point for each tower plus one point for each section of tower showing a gold decoration as well as a point for every open window piece you played. If you have the start player marker, you also get one point.

The Trick in Asara 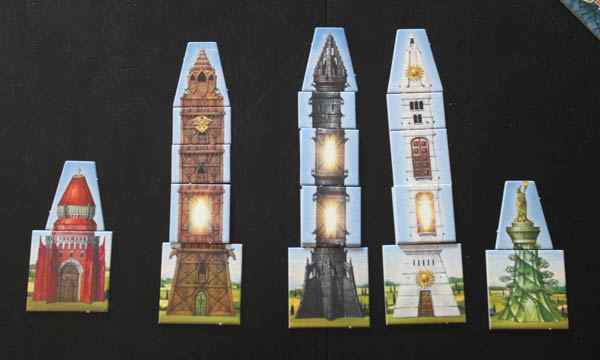 So far, you might think that Asara is a pretty simple game. The trick is that each section in which you can play cards can only contain cards of the same color. The first person to play a card in a section therefore, determines which color must be played there for the remainder of the round. You can play a “joker” in any area by placing a pair of cards (of any color) face down in an open card slot. Of course, this “wastes” one of you possible actions.

How Much Fun Is Asara?

Asara is simply a lot of fun. As of this writing, I’ve only played it twice (the first time slightly incorrectly, which is not unusual), so I haven’t had a chance to try all the possible strategies yet, but I can see there are many.

It seems like your first play should always be to get more workers, because the first player to do so can get them for free. Subsequent players must pay 2 or 4 coins.

But is that really your best play? Is there an available tile that someone else will steal from you in the meantime? Should you bribe the authorities while there’s still the chance to dig out a valuable tile from a stack thus getting it for cheap? Only two people can make the bribe attempt per year, and the second player must pay 5 coins to do so.

Asara does not take long to play, so you should be able to get it to the table fairly often. It’s very easy to learn, even though there are many strategies to explore. See if you can pick up a copy soon and give it a try.

Check the price of Asara on Amazon.