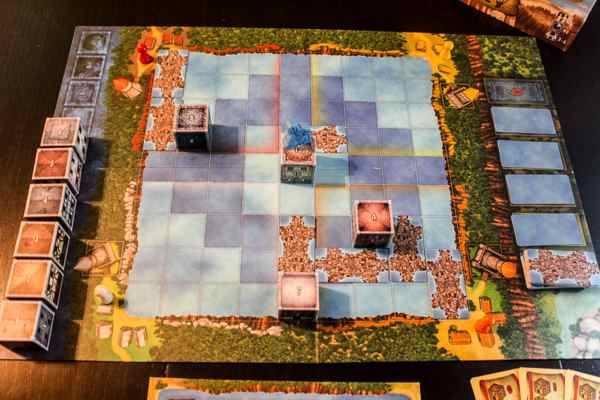 I may sound like a broken record (For those not familiar with vinyl records, a broken record is one which doesn’t let the phonograph’s needle advance along the groove. Thus it keeps playing the same few seconds of music over and over again.), but I have yet to find a game designed by Wolfgang Kramer (and Michael Kiesling or another co-designer) that I don’t like. The latest one I have found is Sunken City, first published in 2004.

You may never have heard of Sunken City because I don’t think it got a lot of press when it first came out. Even today it’s not generally highly valued in the board gaming world, but I’m here to give it some well-deserved praise.

Normally you can’t see a sunken city because it’s…well…sunken. That’s the premise of the game Sunken City too. As often as not, the roads and buildings of the city are not visible (in the play area) to the players. You have to spend actions to raise them so you can explore them and bring home the treasures that the buildings contain. (Each building ostensibly holds a similar treasure for each player to collect.) 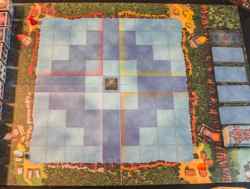 The main area of the game board is a grid that shows where you can raise buildings (the darker squares) and roads (anywhere) and a large area in each corner that affects how far you can move the Neptune token.

Other sections of the board are simply for storage of building cubes, road tiles, and collected treasures. In addition, each player has hand of action cards and a personal mat for holding uncollected treasure tiles.

There is also a die used for moving the Neptune token and a stack of compensatory Neptune disks used when a player sinks below the surface and has to swim back home.

How Do You Put All These Bits Together in a Game? 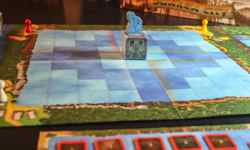 On your turn, you select a card from your hand which will determine what your next actions (up to three) will be. (Each player has an identical set of cards.) You can perform the following three actions in any order.

Each card shows the number of pieces you can raise on (add to) the board. The numbers range from 0 to 4. You can either play all roads, or you can play 1 building and make the rest roads.

Optionally, you can move the Neptune token. If he is in your colored home sector, you can automatically move him the maximum number of spaces allowed depending on the number of players. If he’s outside your sector, you roll the die to see how far you can move him. Any building or road he vacates, sinks (is removed from the play area). 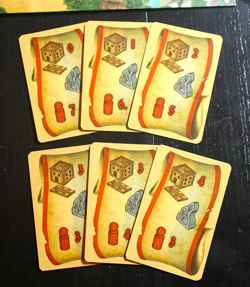 Also optionally, you can move your token based on another number (3 to 7) on the card.

You can only use each card once until your entire hand has been played.

Your personal mat starts with the 11 treasure tiles face down (aka roof side up). When you enter a numbered building, you “discover” the correspondingly numbered treasure tile and flip it over on your mat. If you make it back home while still “holding” one or more treasures, you transfer the tile(s) from your mat to your home area on the game board, thus collecting that many victory points.

If someone sinks your token, all treasure tiles on your mat are flipped back to roof side up until you rediscover them.

If this happens, you are compensated with a Neptune disk that allows you additional token movements equal to the number of treasure roofs visible on your mat.

Your goal is to collect all 11 treasures or, failing that before time runs out, to collect treasures with a higher value than your opponent(s).

But there are only 10 buildings! How do you collect the 11th treasure, the treasure chest?

If you collect any treasure from a building on the center square, you also flip over the treasure chest tile on your mat. Bringing it home safely, as with any other treasure, is how you collect that 11th one.

How Long Is a Game of Sunken City?

The section of the board that holds the road tiles is also the game timer. The first slot holds 20 (or more, depending on the number of players) tiles at the start of the game. This is the initial supply used when raising roads.

Tiles that sink are placed on the second slot for use when the tiles on the first slot are exhausted. This pattern continues down the side of the board until the fifth slot is emptied. If no one has collected all the treasures by then, the game ends anyway, and treasure values are counted.

The production value of Sunken City has both high and low points. The building cubes really didn’t have to be cubes – they could have been flat tiles – but I’m glad they are. They make the game feel like something special. That said, I wish they weren’t so drab looking.

The Neptune token looks a little hokey and dated. A plastic figurine would have been much nicer.

Since I got this game in a trade, I didn’t get to see how the bits were originally arranged in the box insert. If they have specific places they are supposed to be assigned, I can’t figure some of them out. It seems like the box designer didn’t have all the bits in front of him at design time.

I was worried, after reading the rules, that there wouldn’t be much interaction in Sunken City. I was wrong. Also, it seems to adjust and scale well to different numbers of players (2-4).

One quirk, which has been noted elsewhere, is that Neptune, god of the sea, apparently can’t swim, at least, not around this Sunken City. He cannot move through the water spaces (where there is no road or building). Strange. 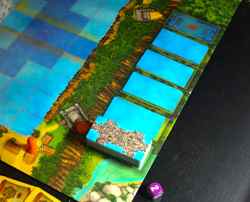 Often I will play with advanced rules, when available, from the start. Usually they add a little to the game without changing it drastically and are quite manageable for beginners. Not so with Sunken City.

I have read Kramer’s advanced rules but not played a game with them yet. They feel like they would change the game a lot. I wanted to get a few basic games under my belt before changing anything.

The basic version of Sunken City allows for plenty of tactical maneuvers as well as some overall strategy. There’s not much room for analysis paralysis, so game play moves along nicely. I look forward to many more enjoyable games of Sunken City.

Check the price of Sunken City on Amazon.

Sunken City – A Review of a Game You Can Sink Into