A guest review by Drew Sonnenberg 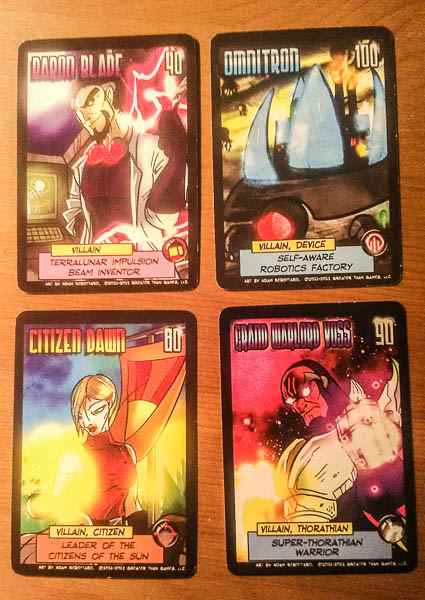 Sentinels of the Multiverse is a game I should never have liked.

It was from a designer and a company I had never heard of. It was cooperative, and I don’t care for many cooperative games. It was composed entirely of cards that were full of text, which meant a lot of reading.

The rulebook tried to be as simple as possible, but ended up being unclear in many areas. The first edition contained fairly flimsy cards and had no way of keeping track of various numbers like hit points (HP) and modifiers.

Despite all of these misgivings, I couldn’t wait to give it a try.

Maybe it’s ’cause I’m a sucker for theme, and this game has no shortage of it. The theme itself couldn’t be more appealing. Who doesn’t like superheroes?

Maybe the artwork helped draw me in.

Whatever the reason, when I finally got my hands on a copy, it quickly shot up to be my most-played game.

Playing Sentinels of the Multiverse

Sentinels of the Multiverse is a cooperative card game in which each player takes the role of a different superhero. Each of these heroes is represented by a character card, as well as a deck of 40 cards that is unique to that hero. 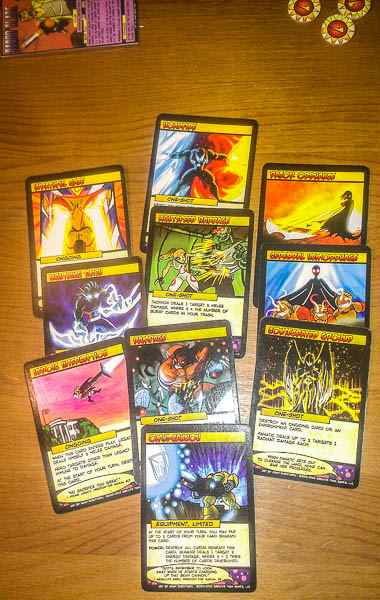 On a hero’s turn, they do three things.

Of course, the cards they play may allow them to bend these rules slightly. Maybe you can play more than one card this turn, or use more than one power.

Finally, after all of the heroes have taken a turn, the environment takes a turn by playing a card.

If a hero is reduced to zero or fewer HP, he is incapacitated, but he isn’t out of the fight.

You flip over your character card and are given a set of incapacitated powers that you can use on your turn to help bolster your allies.

The game ends when all of the heroes have been incapacitated or when they have defeated by the villain by reducing him to zero or fewer HP.

OK, So Why Do You Play It So Much?

There are a number of factors that have led to Sentinels being played so much around my house.

The first is the vast number of different possibilities the game offers. The base game provides you with 10 heroes, 4 villains, and 4 environments. In each game you only use 1 villain, 1 environment, and 3-5 heroes. You can see how the number of combinations with the base game alone is quite extensive. When you combine this with the randomness of drawing from shuffled decks of cards, you can guarantee that no two games will ever be the same. 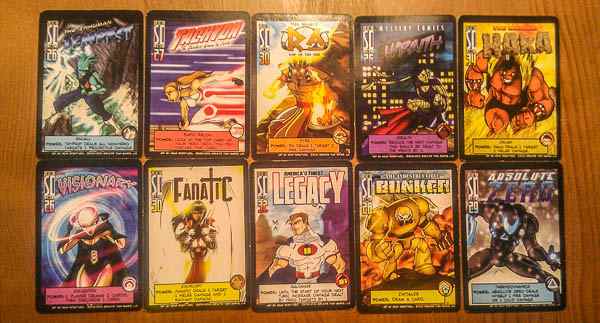 The second is the ease with which you can introduce the game to new players. It takes 5 minutes (or less) to explain the game, even to players who do not play games regularly. Many people are less intimidated by Sentinels because it is a cooperative game so they don’t feel like they have to be “good” at games in order to have a chance at winning.

Additionally, each of the heroes is unique and serves a different purpose. If you don’t want to just go around dealing damage every turn, you can choose a hero that is more focused on supporting others. You can choose a role that fits your personality.

I haven’t even come close to mentioning all of the reasons Sentinels has become a hit.

The cards feature beautiful artwork that help to evoke the theme that is further backed up by the mechanics of the game.

The backstory of these characters is incredibly deep (and continually growing through expansions) especially considering they don’t exist beyond this card game.

The creators of the game are more than happy to help clarify any rules questions. (Check out the forums on sentinelsofthemultiverse.com.)

There are already several expansions available for the game (Rook City, Infernal Relics, and Shattered Timelines), each providing 2 new heroes, 4 new villains, and 4 new environments, with more on the way.

This is a game I am able to play solo (by controlling multiple heroes), or with my wife (with each of us controlling 2 heroes).

The world and the game of Sentinels of the Multiverse are both very deep, fulfilling, and awe-inspiring and that, in short, is what keeps bringing me back.

Check the price of Sentinels on Amazon.

Sentinels – A Review of a Co-op Card Game