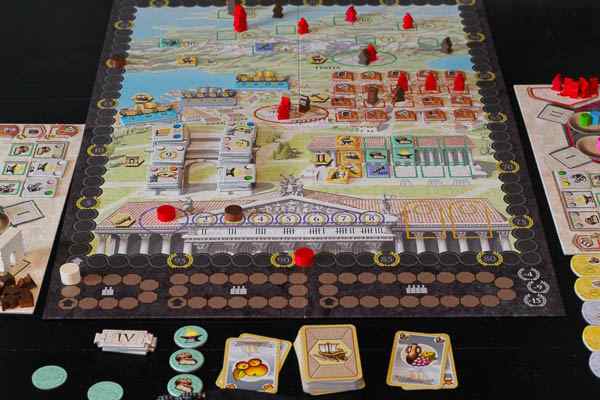 Do you have trouble getting victory points in the games you play? If so, you’ve probably never played a game designed by Stefan Feld.

Games like Trajan are sometimes known as “point salads”, meaning there are a bunch of ways to get points all thrown in together. I’ve played several other Feld games (Rum and Pirates, Bruges, Macao, Notre Dame, The Castles of Burgundy), but Trajan is probably the most point saladiest.

How to Get Points in Trajan

How to Perform Actions in Trajan

The mechanic for determining what you get to do on your turn has been likened to the ancient game of Mancala. 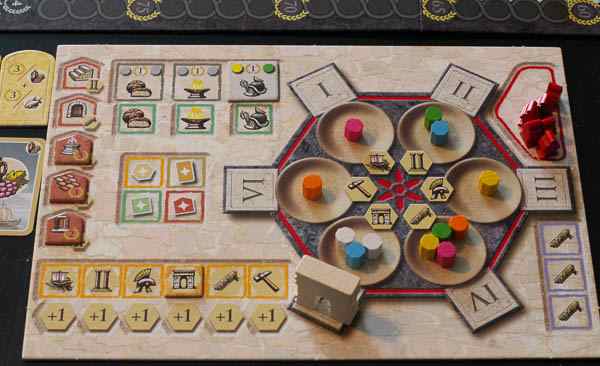 You have 6 pairs of colored tokens on your personal board. You begin with 2 in each bowl on the right side of the board. You pick up any two and drop them one at a time clockwise into the next bowls in the circle.

Inside this ring of bowls, you can see 6 yellow hexes with an icon on each. That icon determines which action you can take. You take the action attached to the bowl in which you dropped your last colored token.

My Mancala above doesn’t show any, but you might have a Trajan tile on one or more of the six Roman numerals outside the ring of bowls. Each Trajan tile shows a number of victory points, a benefit for activation, and two colors which match your bowl tokens. If you end your token dropping in a bowl next to a Trajan tile and that bowl has tokens that match the colors on that Trajan tile, you get to activate it. This takes some planning and is one of the keys to winning the game.

Other parts of your player board are used to store various game bits. In the upper right, you simply store your unused dudes. In the lower right, you store purple senate vote tiles.

On the far left, you store buildings your dudes have built. Between that area and the VI space, you store wild card tiles. Below that, you store tiles that give you extra actions.

Above the wild card area is an important section for storing tiles showing items that the people demand at the end of each quarter of the game. If you can’t meet all their demands, you will lose up to 15 points!

How to Win at Trajan

I have no idea. I have won, but I’ve lost about five times more games than I’ve won. That either says I’m not very good at Trajan or that I just haven’t figured out how to win consistently. (I’d like to think it’s the latter.)

Whether I win or lose, I have a lot of fun playing Trajan. I like Stefan Feld’s games. I like point salads. This is not one of those games where you feel a lot of tension or feel greatly threatened by the actions of other players.

Part of the fun is figuring out how to string several actions together in one turn. It’s often possible if you plan ahead, and it’s a wonderful feeling to execute your moves one after the other and watch the victory points roll in.

Trajan plays equally well with 2, 3, or the full complement of 4 players. Those who have played it more than me seem to think it plays best with 4, but it’s also very good with just 2 or 3. That’s one of the things I look for in a game because I often play with just two.

If you haven’t tried Trajan yet, try to get it to a table near you soon.

Check the price of Trajan on Amazon.