Innovation vs Glory to Rome 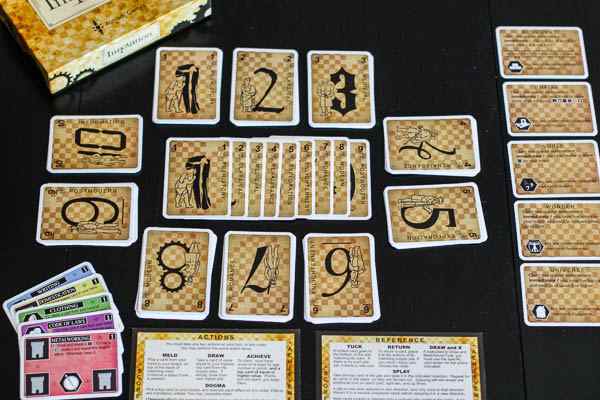 Innovation is a card game that seems like it should be a lot like Glory to Rome, but it’s not. That’s a good thing. Otherwise, what would be the point?

Sure, there are similarities. Both games use cards and a player mat to help keep track of scoring. Both allow you to be nasty to your opponents and to take advantage of their play. Both have several methods for ending and winning the game.

Both have the same designer – Carl Chudyk.

But other than that, the similarities end there.

Innovation supposedly takes you through 10 ages of human existence. 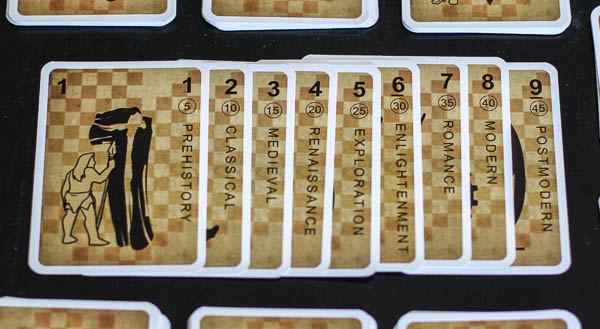 Those divisions have absolutely nothing to do with the game. What’s more important is the large number on the back of each card in each group. (All the Prehistory cards have a 1, the Classical cards have a 2, and so on.)

The deck is made of 105 cards – 10 in each division, plus 5 more in Prehistory. A few more are needed in group 1 because several of them are distributed at the beginning of the game. There are also 5 more cards called Special Achievements.

Setting Up to Play Innovation

To set up the game, you take one card from each of groups 1 through 9 and lay them (face down) in the center of the table. These are called (basic, as opposed to Special) Achievements. Most of the time you want to collect a bunch of these to win the game.

Then you’re supposed to set each mini-deck of cards with like numbers (1 through 10) in a circle around those Achievements. I choose to arrange them in a kind of rectangle around the Achievements to save table space. It really doesn’t make any difference how you set the mini-decks out as long as they are easy enough to reach by everyone.

The Special Achievements are also laid out where everyone can see and reach them.

Deal each player two Prehistory (group 1) cards. Each player secretly decides which one he wants to play (meld). When cards are revealed, the title of the card closest to the beginning of the alphabet determines the starting player (who only gets one action in the first round).

How To Play Innovation

On your turn, you get just 2 of 4 possible actions.

Drawing a card sounds simple enough, but it’s not always as straightforward as you might think. You can draw a card from the mini-deck with the same number as the highest number card you have already played. Eventually all the cards in that deck will be picked up. If the pile you need to draw from is all gone, you draw instead from the next higher numbered pile that is available. 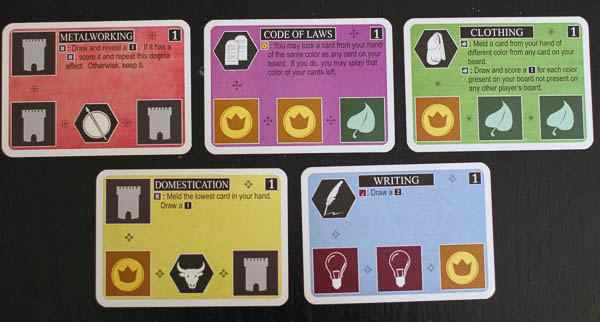 When you meld a card; that is, lay it on the table in front of you, you either add it to a matching colored pile already there or start a new pile for that color. Sometimes those piles may be splayed (fanned out) to the left, right, or upward to reveal more large icons. If you add a card to a splayed pile, you continue the splay with the new card.

The cards in each mini-deck can also be collected as points under the left side of your player mat. Each card is worth as many points as the group to which is belongs. (For example, Prehistory cards are each worth 1 point.) When you have collected 5 points and have melded a card from group 1 (or higher), you can take the group 1 Achievement from the center of the table and tuck it under the right side of your mat.

The Special Achievements have more difficult conditions you must meet before you can take them. You have to keep an eye open throughout the game to see if you have met the conditions and can grab a given card.

As I mentioned above, getting Achievements (of both types) are usually the way to win the game. The number required depends on the number of players in the game. 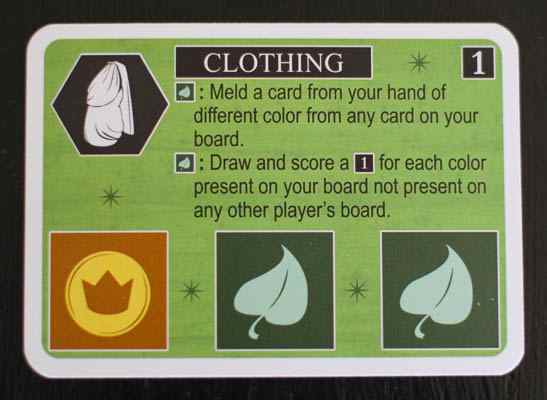 The official rules call the text on each card the Dogma, meaning the teaching. It’s really just the fourth action you can take on your turn.

Each card has one or more of six possible large icons (see the splaying description above) along its left and bottom edges. These same icons appear in smaller size before the action text (dogma) on the card. The card actions come in one of two types – demand and non-demand (or share).

For demand actions, if your melded cards show more large icons of the type shown by the action text than the cards an opponent has melded, you can force that opponent to do what the card says. This text will normally be something bad for him and good for you.

For non-demand actions, if your opponent has an equal number or more of the icon showing, he gets to (or sometimes must) perform that action before you do. If an opponent does perform the action, you will get a free draw action.

Again, most of the time, the first player to collect enough Achievements will win. But sometimes you will get all the way up to mini-decks 9 and 10 with no winner yet. In those decks, there are cards that specify alternate game ending and winning conditions.

If you should happen to get through all of those without a winner, the game ends when mini-deck 10 is gone and someone still needs to draw. At that time, the player with the most points (not Achievements) wins.

As of this writing, I have played Innovation five times. I have yet to win. This makes me want to play all the more. I want to discover the ways to thwart my opponents when I don’t have cards that allow me to score (and thus collect Achievements). I want to find out how to get more icons showing so that my opponents can’t demand actions of me. I want to learn how to steal points from my opponents to prevent them from getting more Achievements.

I expect to play Innovation many more times (not before I win) to acquire all these skills – hopefully before my opponents do.

Check the price of Innovation on Amazon.