A Review of Tzolk’in, The Mayan Calendar

Tzolk’in is such a difficult name to spell (I can never remember where to put the apostrophe – if that’s even what it’s called here.) and to pronounce that here in Wisconsin we tend to call it Tolzien instead. Here’s why.

That said, Tzolk’in is such a fun game to play that I gave it a rating of 9 (out of 10) after my first play. That’s a rare thing for me to do. I usually give a board game an 8 if it’s pretty good or a 7 if it’s a keeper but just an okay game.

In addition to being hard to spell and say, Tzolk’in is also hard to play well, so it’s great that it’s a lot of fun trying. 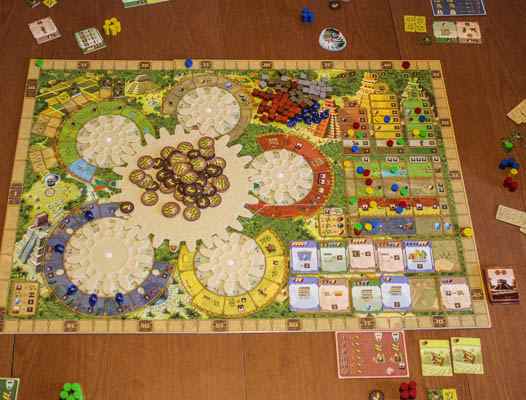 The Tzolk’in game board is simply amazing. Besides the normal spaces for wooden bits and cardboard tiles, there are six interlocking gears that are the heart of the game.

In the picture above, you can see the white center in most of the gears where each attaches to the board. If you work at it, you can remove these gears, if you wanted to paint them, for example. But the cool thing is that you don’t have to! The board itself fits together like a jigsaw puzzle in such a way that you can leave the gears attached, and everything will still fold nicely into the box. (I have since applied the color coded stickers to the center of each gear to cover up the white center. This makes identifying each gear a little easier.)

And then there are the awesome blue skulls. (See the first picture above.) I’m not sure what they’re made of, but they’re relatively heavy for their size. These are not cheap bits that you have to be careful not to crush or break.

You place these skulls around the blue gear as one of the ways to score points. 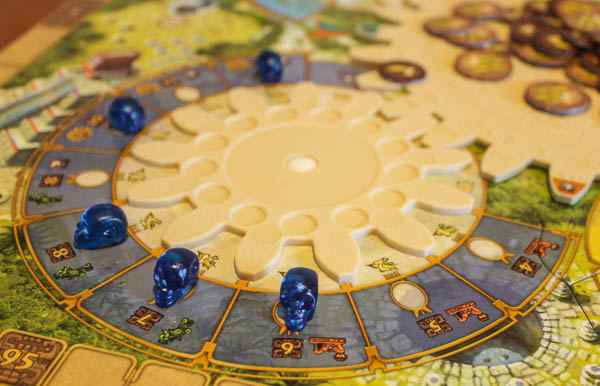 How to Try to Play Tzolk’in

Think about that. The spot where you placed your cylinder will have moved “forward” around the gear to a new location before you get to remove it and take the associated action shown around the edge of the gear. That takes some planning and timing to make everything turn out the way you hoped it would.

You can only either place tokens on your turn or remove tokens and take the actions. You can’t do both!

If your timing is off and your token moves past the space you were hoping to use, you can still use that desired space, but it will cost you some corn (which is essentially the currency in Tzolk’in).

What the Gear Spaces Give You

One of the gears provides corn (money) and wood. Another provides (more) wood, stone, gold, (more) corn, and the coveted blue skulls. A third gear lets you construct buildings and advance along the 4 tracks on the tech tree.

One of the gears has a space for acquiring more workers as well as giving many opportunities for using corn; it feels like a marketplace. The final gear is where you deposit your blue skulls for victory points, for climbing the three temples, and possibly for gaining more resources.

Determining which gear to use and when to use it is your main task in this game. There are dozens, if not hundreds, of combinations worth considering. Pick a few and go for it; you can’t do everything.

The Buildings, the Tech Tree, and the Temples

You can spend resources to construct buildings (cardboard tiles) that give benefits such as feeding your workers, making it easier to move along the tech tree, giving straight up victory points, and more.

The tech tree (It’s never actually called that in the directions, but that’s what it really is.) consists of 4 tracks that make your life easier too. You can gain additional resources above and beyond what you would normally get on a gear space. You can get resources and points for constructing buildings. And you can get more blue skulls.

Each time you advance along one of the tracks, it costs resources (wood, stone, or gold cubes) – 1 resource to make the first move, 2 for the second, and 3 for the third. After that, it costs just 1 cube each time you want the benefit found on the fourth space of the track. 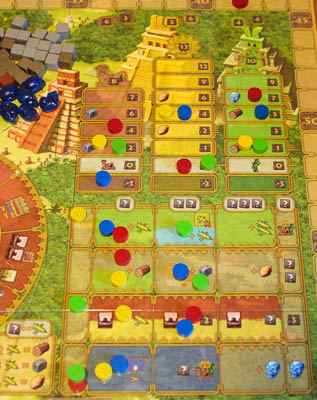 There are times during the game when you might anger the gods of these temples by your worker’s actions. If you do, you must move down a step on a temple, so it’s possible to get negative points unless you’re careful with your planning.

Should You Get Tzolk’in?

I regret that you probably can’t tell at this point how to play Tzolk’in. It’s a very difficult game to describe in print, so I didn’t really try to give a complete explanation. If you like worker placement games, I think you’ll love this one. Often you’ll hear about such-and-such a game that is like some other game but with a twist. Tzolk’in has that twist literally (the gears) and figuratively (do the action when taking workers off the board).

Tzolk’in is a fun board game with lots and lots of possibilities to explore. I’ve tried out a few of those possibilities and can see bunches more that I still want to give a go. So if you like games with that kind of depth, give Tzolk’in a go yourself.

A Note about the Central Gear

Apparently someone goofed along the way when this game was designed. The central gear doesn’t actually show the Mayan calendar, as the full name of the game suggests. It’s really the Aztec calendar, but no one really cares.

Some people have taken hours and hours of time painting the design on the calendar with some pretty amazing results. Take a look at some of their efforts on Board Game Geek to see what I mean.

Check the price of Tzolkin on Amazon.

How Do You Play (and Spell) Tzolk’in?