A Fun Board Game for Many Youngsters

Mago Magino has some of the cutest bits you’ll find in a board game. It comes with a little wizard who, even though he may not get used all that much during the game, is almost worth the price of the game all by himself.

In the picture below, he’s standing at the top (left) corner, but unfortunately he’s facing away from the camera. (Sorry about that.) 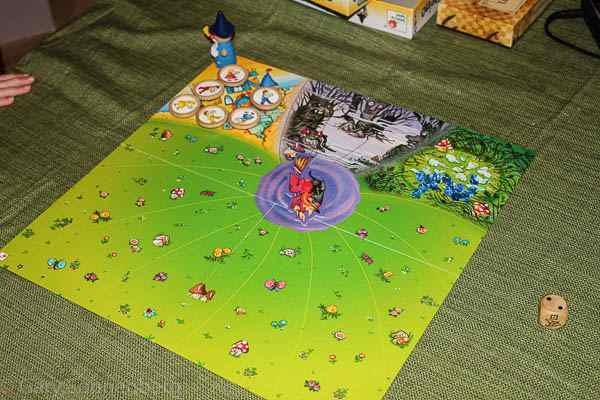 Each player in Mago Magino is represented by 2 disks each showing a child (a boy and a girl) on one side and a frog on the other. Your goal is to move one or both of them from the starting castle (upper left corner of the board) to the glade where the gems are found (upper right corner of the board), collect a gem, and take it back to the castle. Do this three times, and you win.

You roll a die and move up to four spaces, so this would be an easy task if it weren’t for the witch. Whenever you roll a one (which also shows a witch), you must spin the spinner in the center of the board. If she points to a child, that child disk is flipped over, effective turning him or her into a frog. If the child was carrying a gem, he drops it.

You might try to take the shortcut through the dark forest every time, but if the witch points to any forest space – not just the one you are on – you become a frog.

Frogs can turn back into children either by hopping (one space at per turn) back to the castle or by having the wizard come to meet them. 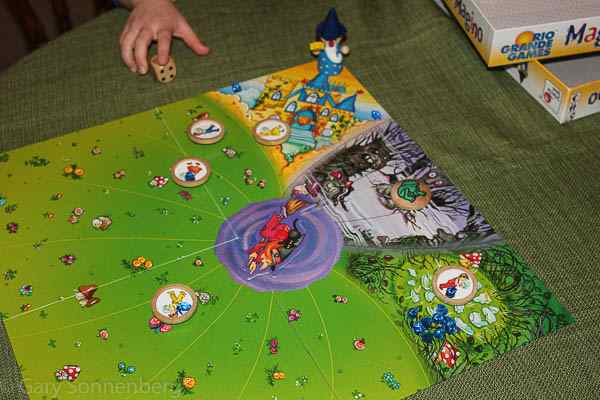 In the picture above, you get a little better look at the wizard. You can also see a child who has become a frog sitting on one of the three dark forest spaces.

The More the Merrier

You and/or your youngsters will probably enjoy Mago Magino most with at least 4 players. When there are more opportunities for someone to roll a 1 on the die, the game play becomes more interesting. You can have more fun being a little nasty by turning players (sometimes yourself) into frogs.

If you have a child who is going to be really upset by being turned into a frog, don’t play this game with him. It’s going to happen sooner or later. That said, maybe you can persuade your youngster that this is all just in good fun, even though bad things (i.e. temporarily becoming frog-like) sometimes happen to good little children.

Adults, this is a game where you can, if you like, make moves in which you give the young ones a better chance to win. You can always take the long way around never taking a chance on the dark forest. You can also move both of your child tokens at the same time, which will take longer for either of them to grab a gem than if you just employed one of them.

A Fun Game but Not the Best Kids’ Game

I have enjoyed the few times I’ve played Mago Magino. The games were close with a young person either winning or coming very close to winning.

This is a game designed by Reiner Knizia who is known for some very good games. This one is okay but not his best. That said, I doubt young folks will be able to tell – especially because they probably have limited experience with games. So you can have fun playing it with them without being concerned about it being a “bad” game. It’s not.

Check the price of Mago Magino on Amazon.

Mago Magino Review for the Little Magician in You