Did the Poor Rules Translation Hurt This Good Game?

The board game called Australia (not to be confused with the island continent itself) is a really good game, but it must have one of the worst English rule sets that I’ve ever read. I’m not alone in that judgement. There are plenty of similar comments over at Board Game Geek.

In fact, the question has been raised in more than one place as to whether the poor rules translation is a reason for the relative low rating of this fine game. 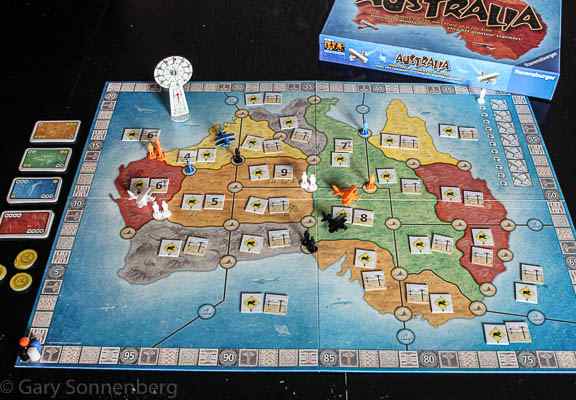 One of the reasons I’m a little surprised that Australia isn’t ranked higher is that there are times during the game play that I’m reminded of my favorite game, El Grande, which is a very highly-ranked game. Even though El Grande was first published in 1995, it’s still in the top 25 at Board Game Geek. Australia, published 10 years later, currently ranks between 1100 and 1200.

The small similarity to El Grande isn’t all that surprising. Both games were designed by Wolfgang Kramer and Michael Kiesling. Both games are more tactical than strategic. In other words, you react to the current situation as opposed to trying to have an overarching game plan.

Those old enough to remember the TV series Fantasy Island will understand the “De plane!” reference.

One of the main components of Australia is a fairly detailed, plastic airplane. The other is a plastic ranger, which is also quite detailed.

Probably the most common move on a given turn is to fly your plane into a region, play a card of a color matching that region, and deposit one to four rangers on one of the adjacent camps (circles).

At the beginning of the game, each of these regions contains 2 tiles – a koala and a telephone line tile. The latter has a number on the reverse which is revealed when a plane flies into the region.

When there are exactly as many rangers surrounding the region as the number on the telephone line tile, that tile is removed and you score points for each player with rangers in the camps.

You score the koala tile when all the circles adjoining the region have at least one ranger in them.

The Windmill and Additional Scoring

The “6” and “7” telephone line tiles show a little windmill. When they are flipped, the windmill is moved into that region. 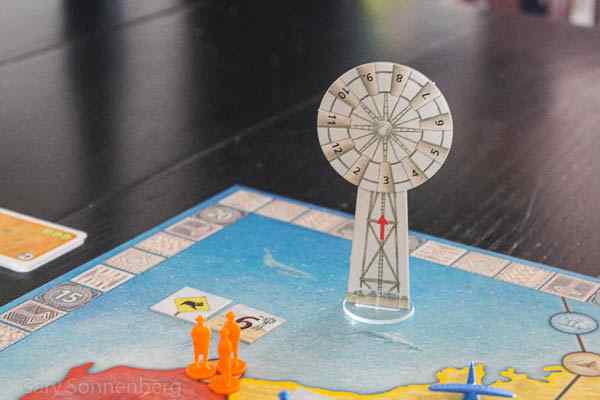 The windmill gives you an opportunity to score more points. (This is used only in the advanced version of the game, but it’s not that difficult to understand, so I recommend using it in almost all circumstances.)

When any tile is scored, you move it to the windmill track in the upper right section of the board. When that track is full, you score points, starting with the number currently indicated at the bottom of the windmill. The dial on the windmill is turned (increased) every time you flip a windmill (6 or 7) tile.

Who scores those points? Well, if you can place rangers in the region that currently contains the windmill, you have the option of placing one or more of them at the top of the ranger track (next to the windmill track) instead.

If there are ties for majorities, the player who got there first (and is thus higher on the ranger track) gets the points.

After scoring, the tiles are removed from the track, and the top half (rounded down) of the rangers are returned to their owners. You slide any remaining rangers up the track for the next windmill scoring!

A Few More Rules and the End Game

Eventually, you will probably run out of rangers to place on the board. If you do, you can fly your plane to any region that has some of your rangers in its nearby camps and bring up to 4 of those rangers “back home” for use on a future turn.

The cards you play (from your hand of two) may show from one to three coins, in addition to the rangers you can play. When you play a card, you collect the number of coins shown from the bank.

You can pay 3 coins to change the color of a card, in essence making it a wild card. This is useful if you don’t have a card matching the color of the region you really want to deposit rangers into.

Normally, you only get 2 actions per turn, but you can pay 4 coins to get one additional action. This action must be to move one of your rangers from one circle to another anywhere on the board. (Note that circles can only contain rangers belonging to one player.)

When all the cards from the four decks are exhausted, the game is nearly over. At that point, if a player plays his last card, the game ends immediately, and you score the windmill once more.

Kudos to the Engineer

Australia has one of the best box inserts of all the games I own. 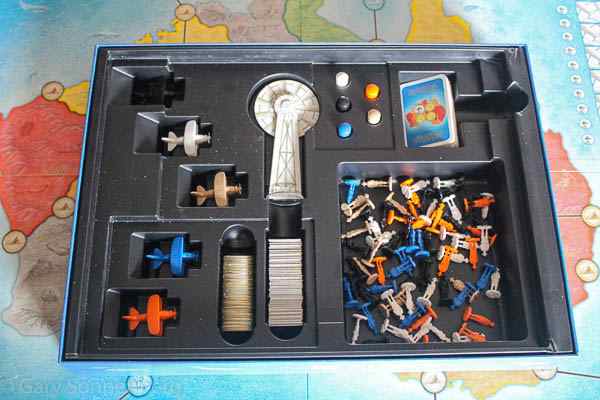 Whoever designed it was really thinking about the bits. I had to assemble the windmill before our first game. See how the insert engineer created a spot for the assembled windmill, so you don’t have to disassemble it after every game.

As you can also see, there is a cozy spot for every other bit in the game. Okay, maybe not for the rangers, but what else would you really want there?

There are some rather useless, four-language, rectangular, cardboard player aids that you set on top of the tiles and two planes. The game board folds into quarters and fits nicely on top of everything. You can easily remove it using the finger hole at the side of the insert.

Australia is still readily available, despite being almost 10 years old. I suggest you pick up a copy and learn to play it soon. I think you’ll be glad you did.

Check the price of Australia on Amazon.