A Four-Year-Old Could Play Genesis

You could teach your young son, daughter, or grandchild how to play Genesis. It’s that simple. They might not score many points, but they could easily play the game with you.

Here’s how you play. Roll a pair of specialized dice and place two of your correspondingly-colored tiles on the board on any open square other than a volcano, lava, or tar pit space. 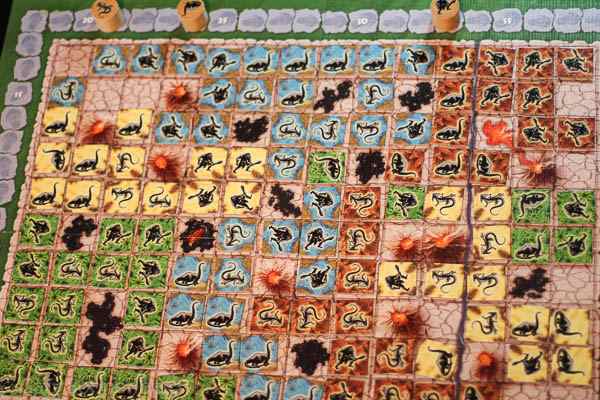 How To Score Points in Genesis

You play Genesis as one of four “species” – Dinosaurs, Reptiles, Humans, or Mammals (not shown in the 3-player game above).

Majority and second place in smaller color groups also score points. You play tiles until there are no more contiguous groups of three empty spaces on the board.

Honestly, I haven’t played Genesis often enough yet to develop a strategy that will always win. There probably isn’t one. That’s probably a good thing.

These choices make for very interesting decisions, and that’s the heart of Genesis. Determining which option to choose should give you hours of pleasure playing Genesis. Each game takes an average of 45 minutes, but you’ll probably want to play it several times (in a row?) to increase your knowledge and skill and thus your chances of winning.

Check the price of Genesis on Amazon.

Genesis – Not the 1st Game Ever But Very Easy to Play