And You Thought Rubik’s Cube Was Tough

Many, many years ago, I got my first Rubik’s Cube. I managed to solve it, but only after about six months of puzzling over it. I know my solution isn’t the fastest, but it works.

I haven’t spent six months with the Twiddler (see note at the end of this post), but somehow it seems more difficult than the Cube.

If you’re up for a real challenge then, may I present the Twiddler Double Dilemma by Hape (a German company, pronounced hah-pay). 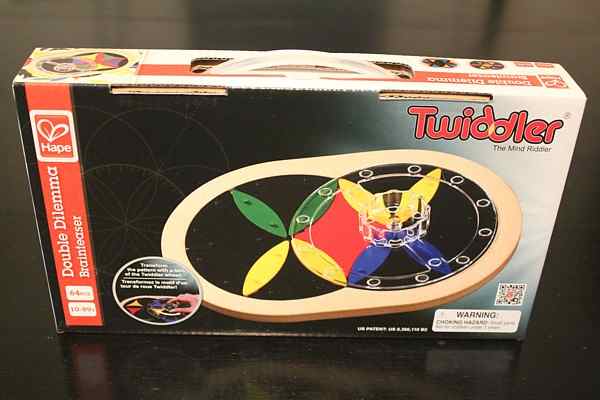 What You Get in the Box

The Double Dilemma consists of a solid, magnetized, race track shaped base board, a bunch (61) of colorful lens shaped and triangular pieces, a clear plastic wheel for moving the puzzle pieces, and an instruction booklet.

There are more black pieces because they are used as fillers around the red, blue, yellow, and green pieces – a fact that I must admit was not obvious to me until a friend pointed it out.

The booklet doesn’t contain much in the way of real instructions, but you really don’t need more than what you’re given either. 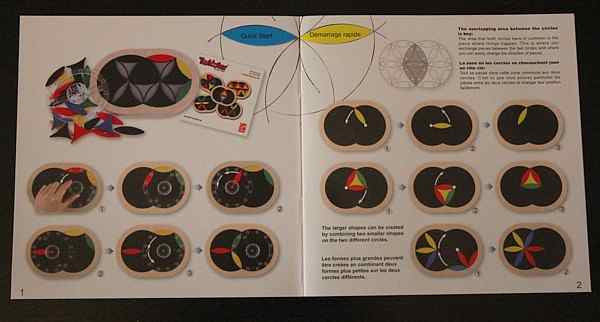 I do wish the solutions to the puzzles were not on the same page as the problem. I found myself often looking back to the booklet to see my goal. It would have been nice if I didn’t have to be concerned about peeking at the shortest possible solution. 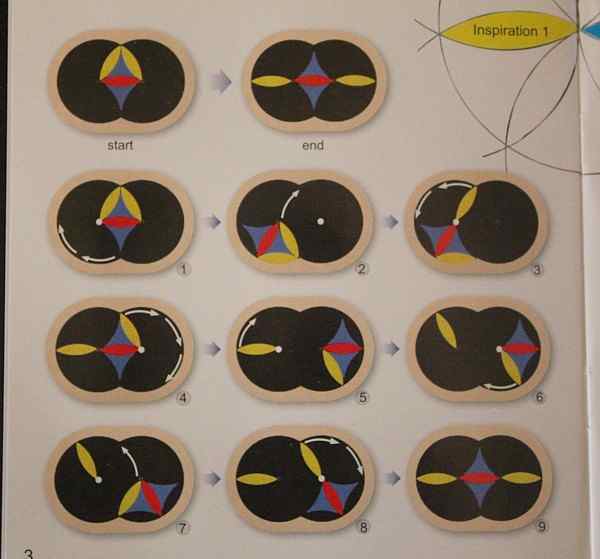 In this edition of the booklet, there are several minor errors (none of which really affect your puzzling) which I assume will be corrected in future printings.

How You Work the Twiddler

Once you have chosen a puzzle to solve, you need to set up the start position of the tiles. Here the magnetism of the base board is a real help.

Each tile has a small bit of metal embedded in its center. 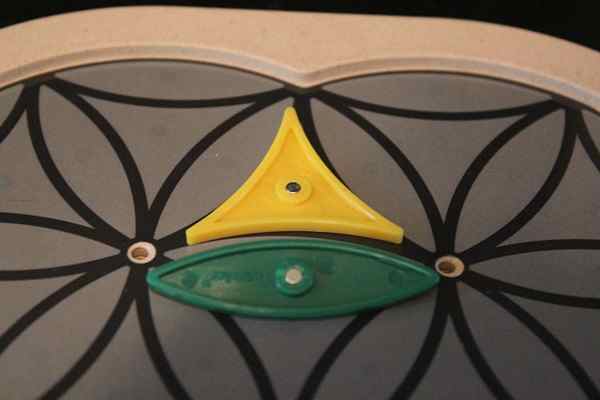 Here is a sample puzzle in the start position. Where do you move to first? 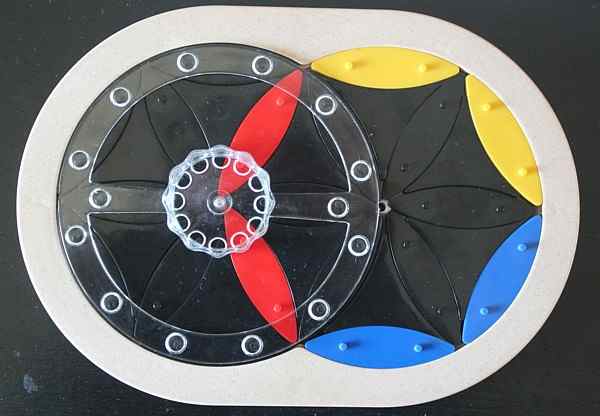 You overlay roughly half of the puzzle with the clear wheel and give it a twist clockwise or counterclockwise. And you can start on the left or the right. In this case, it doesn’t seem to make sense to start on the right, but you could.

If you start on the left side, as shown, how many times do you turn the wheel? Once? 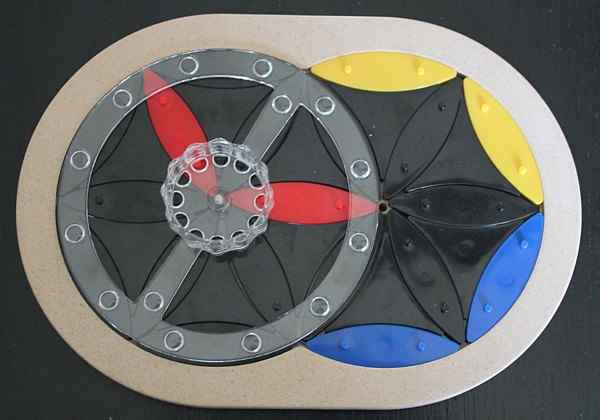 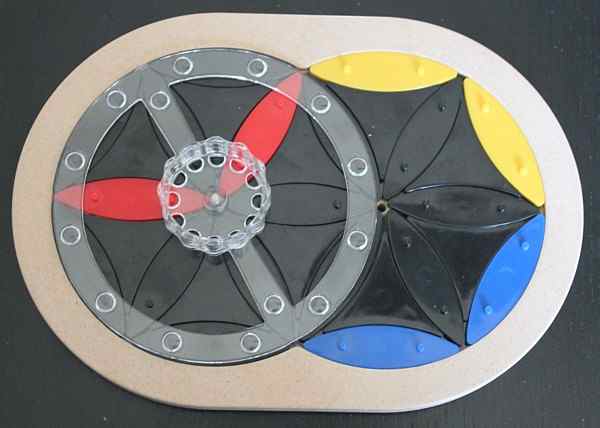 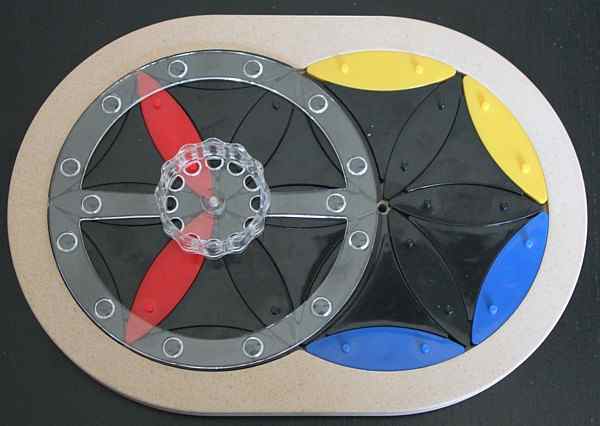 At this point, it’s nearly impossible to tell. If you’re trying to solve the puzzle in the fewest number of moves (which I do not recommend for beginners) as shown in the directions and you make the wrong initial twist here, you’re sunk.

In my limited experience with the Twiddler, I found it very difficult to tell if I was making progress towards the solution. My moves felt very random. When I did near the end state required, I didn’t realize I was there until I was just one or two moves from my goal.

Perhaps this is simply my lack of twiddling experience, but with the Rubik’s Cube, I can tell many moves in advance how far away from the solution I am.

The fewer non-black pieces there are in a Twiddler puzzle, the easier it is to solve. For example, a puzzle with just one red, one blue, and one yellow lens piece is relatively easy to complete. Adding just a few more such pieces increases the difficulty exponentially. 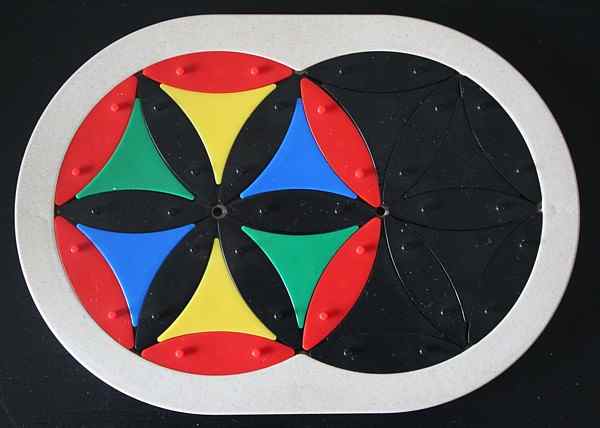 For the set up above, you have to swap the inner black lenses with the outer red ones while keeping the blue, yellow, and green triangles in their same relative positions. That’s tough!

Then you can also add expansions – Perplexers and Mega-Plexers – as if you didn’t find the basic set hard enough. 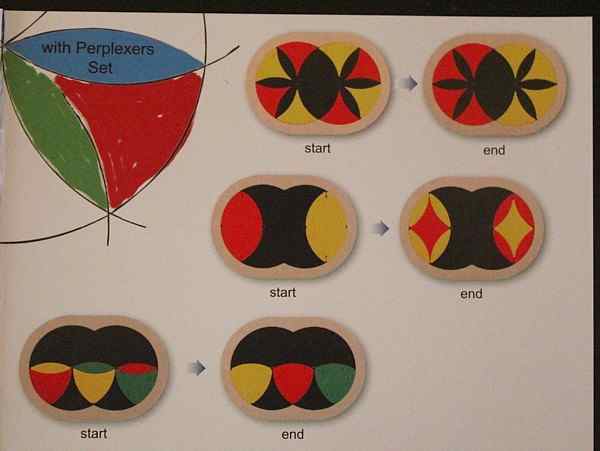 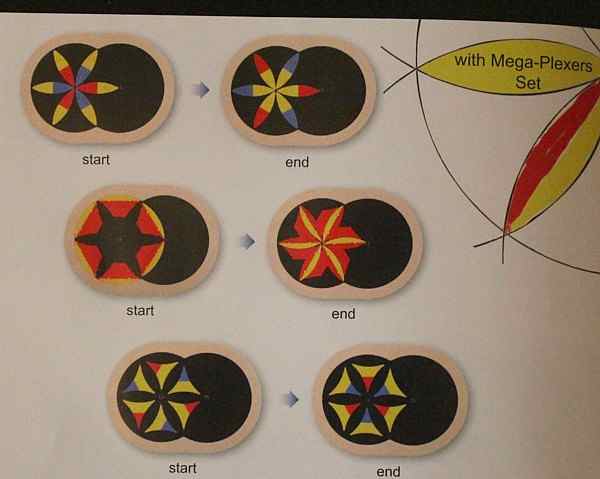 Besides all that, you can also get a basic set called Triple Temptation which presents an additional circle on the base board giving you a sort of triangular shape to start with.

To Twiddle or Not to Twiddle?

If the Rubik’s Cube and other similar logic puzzles bore you to tears, try the Twiddler Double Dilemma. It will keep you occupied for many hours. And when the base set grows tiresome, add one or both expansions. Then progress to the Triple Temptation.

You won’t be disappointed with the quality of construction which is extremely high. You could be frustrated by the difficulty, if this type of puzzle doesn’t mesh with your mind.

Note that the Twiddler is a puzzle, not a board or card game such as you’d usually find here at Fun Board Games.

Check the price of Twiddler on Amazon.